Like the rest of the liberal media elite, NBC's Today was in a frenzy over the Washington Post's charge -- denied by the Trump administration -- that the President shared classified information in a recent meeting with Russian officials. Co-host Savannah Guthrie started Tuesday's show by saying the White House was in "crisis mode," with "outrage in Washington" over the "jaw-dropping story." 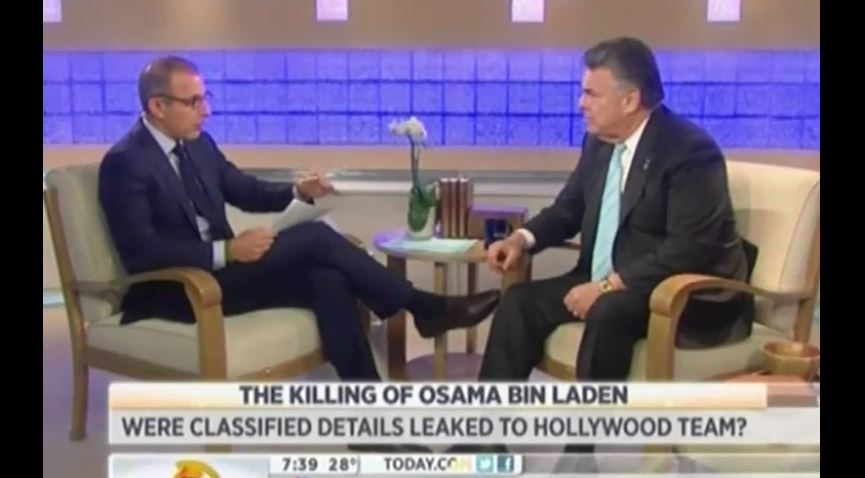 But five years ago, Today had a different take when the allegation was that the Obama administration leaked classified information to a pair of filmmakers making a Hollywood blockbuster (later released under the name Zero Dark Thirty) about the highly-secret raid that killed Osama bin Laden.

On the January 19, 2012 edition of Today, co-host Matt Lauer challenged GOP congressman Peter King to prove his accusation: "Have you personally seen any evidence that indicates that these filmmakers were given classified information?"

Lauer suggested any leaks could be chalked up to business as usual, telling King: "Leaks happen all the time in Washington. It's like a sieve. Do you think this was an intentional leak to paint the Obama administration in the best possible light? Are you willing to take that leap of faith?"

He then implied that any criticism of the Obama administration was a result of partisanship: "What about your motivation? Had it been a Republican president who was in office at the time Osama bin Laden was killed and a movie was to come out that would paint that operation in the best possible light, would you be sitting here today?"

Here's a clip of how NBC covered the allegations against the Obama administration in 2012:

Ten months later, after the election, Judicial Watch revealed "that Obama administration officials disclosed in sworn court documents that sensitive information released to the filmmakers for the upcoming film on the bin Laden raid,  Zero Dark Thirty, could cause an “unnecessary security and counterintelligence risk” if released to the public."

A few weeks later, the McClatchy news service reported that a top candidate to become CIA Director had been the source of leaked information to the film makers.

Pentagon investigators concluded that a senior Defense Department official who’s been mentioned as a possible candidate to be the next CIA director leaked restricted information to the makers of an acclaimed film about the hunt for Osama bin Laden, and referred the case to the Justice Department, according to knowledgeable U.S. officials.

The Justice Department received the case involving Undersecretary of Defense for Intelligence Michael Vickers in September, but so far it’s declined to launch a criminal prosecution, said two senior U.S. officials who requested anonymity because of the sensitivity of the matter.