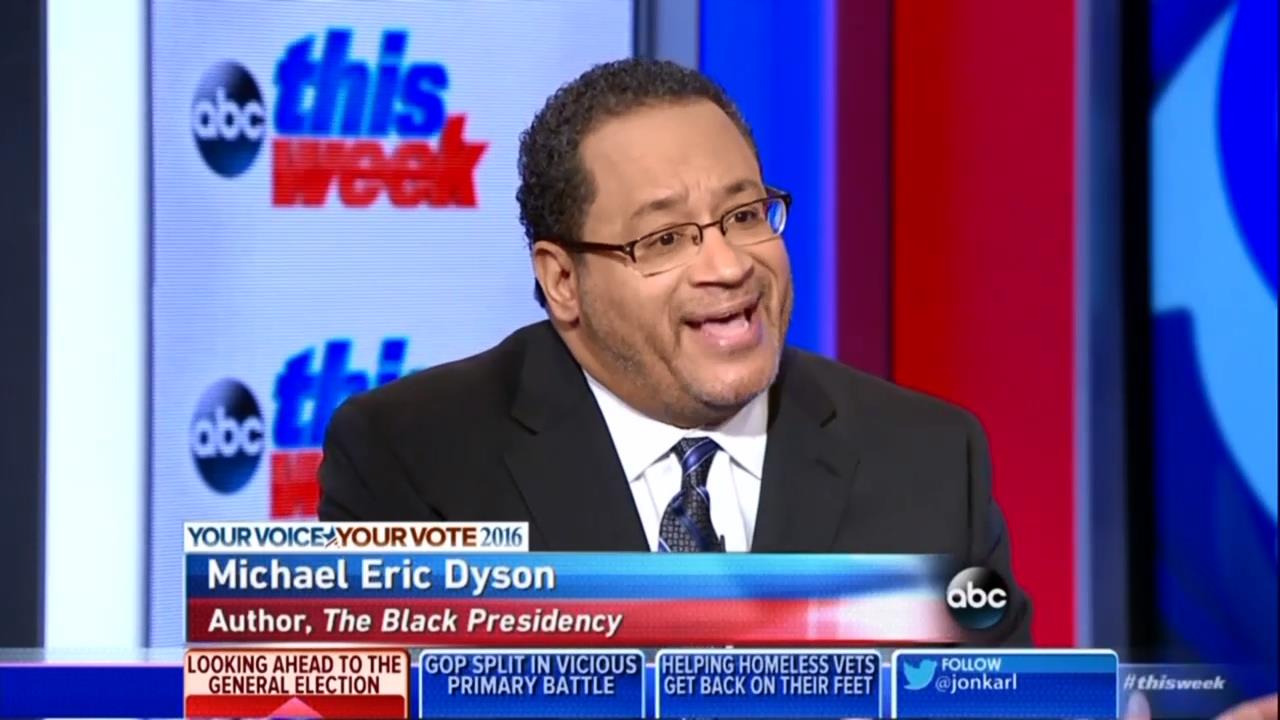 Instead, spewing a nearly-incomprehensible gumbo of academic jargon and made-up words, he claimed “millions” of Republicans “conceded to the legitimacy” of Trump’s birther claims against President Obama, vs. “some” who “stood on the gap,” and he juxtaposed Trump’s foreign policy “unsagacity” (good luck finding that one on dictionary.com) with Hillary Clinton’s “keen intelligence.”

That last bit of apple polishing drew a “give me a break” from Weekly Standard editor Bill Kristol, and a sharp rebuttal from Wall Street Journal editorial board member Mary Kissel, who quickly listed four major foreign policy blunders from Clinton — supporting the Iran deal, supporting Obama’s withdrawal of troops from Iraq, failing to support Iran’s freedom movement in 2009, and doing little to oppose China’s expansionism.

Dyson reacted by praising Clinton for seeing her role as Secretary of State as “an arbiter of an American will that is not artificially or arbitrarily imposed, but creates a kind of dialogue” – which sounds like a way of saying “leading from behind” — and suggesting Kissel’s list should have included claims of police brutality.

Dyson ended by praising “the ability of Barack Obama to at least speak intelligently to the issues of domestic division that Donald Trump has now exploited to no end. And the Republican Party has to pay the tab for that.”

What follows is the video and transcript of the segment — see if you can follow Dyson’s liberal logic:

Fill-in host JONATHAN KARL: So, let me try this: Hillary Clinton versus Donald Trump. What do people like you do, going into the voting booth?

Wall Street Journal editorial board member MARY KISSEL: Who is me? Who are people like me?

KARL: You know, people that read the Wall Street Journal editorial board, what we’ve thought of as traditional mainstream Republicans. What do they do in that –

KARL: There you go. What do you do? Do you vote for Hillary Clinton? 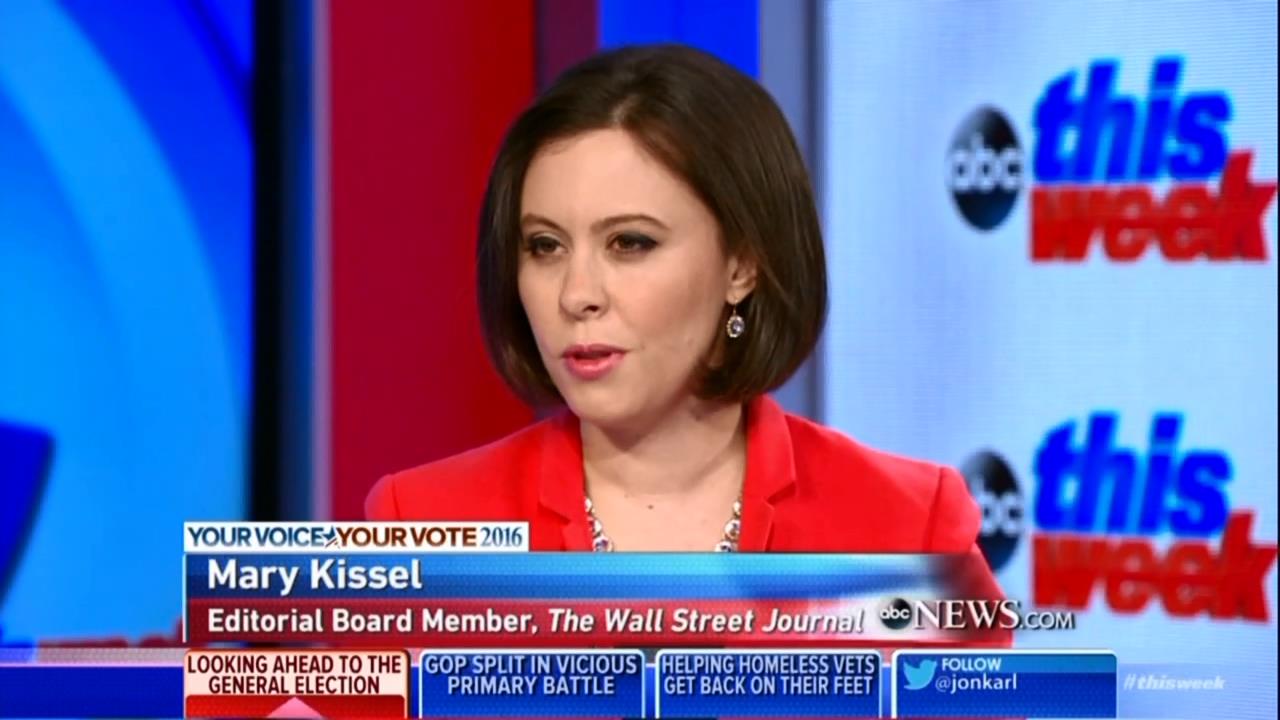 KISSEL: Well, first of all, Donald Trump is not the nominee yet. He is the weakest GOP front-runner since Gerald Ford in 1976. He loses by miles, as we talked about before, in a general election to both Hillary Clinton and to Bernie Sanders. What would we do? Well, we analyze every candidate based on their policies. You just had a report on Brussels. Donald Trump’s policy to fight the war on terror is effectively the same as President Obama’s. He’s advocating nation-building at home and isolationism abroad. So, that’s the kind of analysis we would do, were he the candidate.

KARL: Okay, let me try it with you. Bill, do you vote for Hillary Clinton? 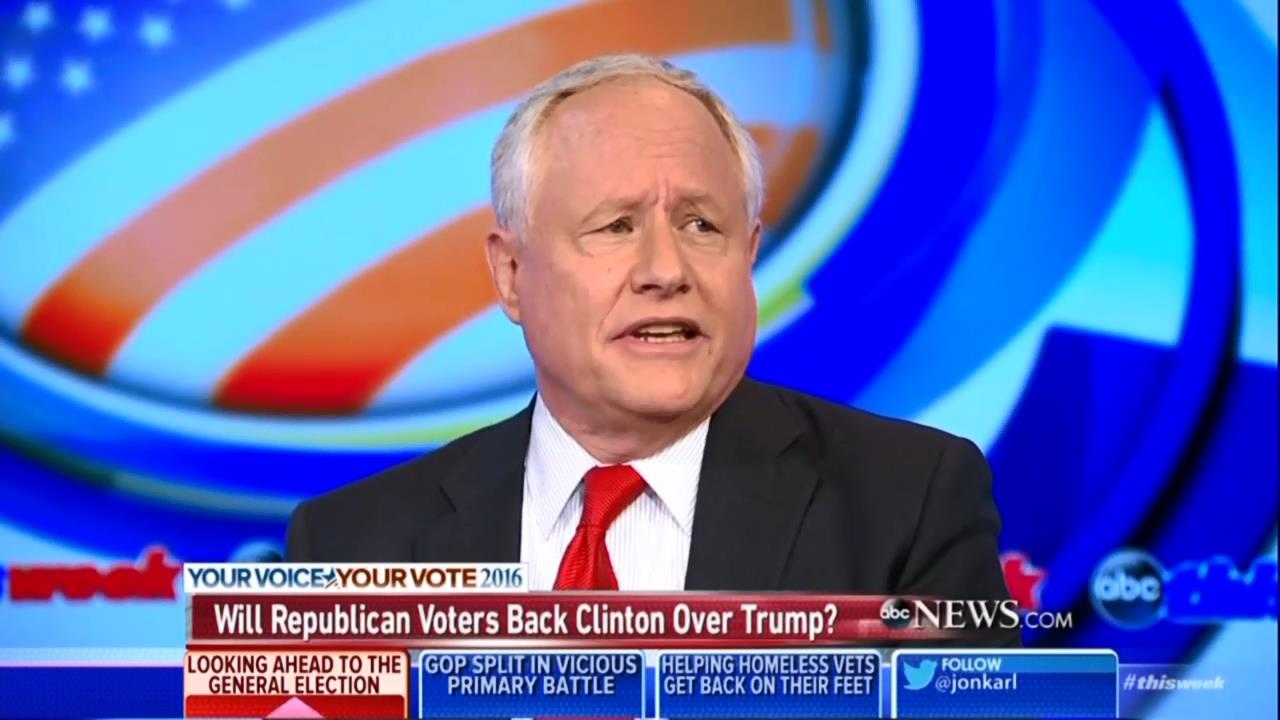 Weekly Standard editor WILLIAM KRISTOL: No. I don’t vote for Hillary Clinton. I don’t vote for Donald Trump. I think we can deny Donald Trump the Republican nomination. If we fail to, we deserve to have a better choice than Clinton or Trump. Really, it’s a terrible choice for the country. There are plenty of decent people could run as independent Republicans, and I think they could do pretty well. And, incidentally, we do not – everyone here is proclaiming Trump the nominee and, “can he take on Clinton?,” buying Trump’s own talking points. Trump could be a horrendous – the bottom could fall out on Trump in a general election. These guys [pointing to the liberals on the panel] want Trump to be the face of the Republican party.

ESPN senior writer LZ GRANDERSON (chuckling off camera): What do you mean, these guys?

KRISTOL: I don’t want Donald Trump to be the face of the Republican party. Look at them [gesturing again to the liberal panelists]. Now they’re upset.

Georgetown University professor MICHAEL ERIC DYSON: When Donald Trump was buffeting Barack Obama, when he was calling him – as a birther – an illegitimate American – yes, there were some Republicans who stood on the gap, so to speak, but there were millions more who conceded to the legitimacy of that point. And now the Republican Party gets what it deserves, in the sense of that inability to put a barrier against itself and Donald Trump. And look at the Washington Post interview, the vast reaches of unsagacity that are revealed there –

KRISTOL: Give me a break.

LZ GRANDERSON: I just want to say, and, first of all, I’m not like a Hillary Clinton surrogate. There are no paychecks coming through my account because of Donald Trump, or her, or anything like that. My point is as an American first, it is embarrassing to me that this is someone who could represent a major party.

DYSON: Let’s talk about that record, and let’s talk about the record in this sense. The things that you named there – what Hillary Clinton has done as the secretary of state is understood her role as an arbiter of an American will that is not artificially or arbitrarily imposed, but creates a kind of dialogue. What people find problematic about President Obama is that he will not carry a big stick. He will not have the bluster of a Donald Trump. It is intelligent diplomacy in the service of American ideals. And, ultimately, at the end of the day, what you didn’t mention was the police brutality issues that are here in America –

DYSON: What you didn’t mention – and this is what’s at stake, too – what you didn’t mention was the ability of Barack Obama to at least speak intelligently to the issues of domestic division that Donald Trump has now exploited to no end. And the Republican party has to pay the tab for that.