Leading into tomorrow’s presidential debate, journalists are busy setting expectations for the candidates. On Sunday’s Good Morning America, ABC’s George Stephanopoulos argued that Mitt Romney is under “huge, huge” pressure: “He is behind right now. He is behind nationally, he’s behind in all of the battleground states. This is the last big audience that Mitt Romney is going to have with about four and a half weeks left to go.”

But more undecided voters will be swayed by the media’s post-debate spin about who won and who lost than by any pre-debate expectations. Reviewing the last several campaigns, MRC analysts have found a clear trend of network reporters fawning over the performance of liberal candidates, while harping on any perceived weaknesses or gaffes from conservatives.

One of the most reliable pro-Democratic pundits is none other than George Stephanpoulos — not especially surprising, given his track record as a loyal operative for Bill Clinton’s 1992 presidential campaign, but hardly the objective, unbiased voice touted by ABC News. MRC has documented how, in eight out of the last nine general election presidential debates (every one since he joined ABC News in 1997), Stephanopoulos has gone on his network’s airwaves to claim victory for the Democratic candidate, all in the guise of offering impartial analysis. [Video review below the jump.]


Stephanopoulos even called Al Gore the winner after the first debate in 2000, the one in which the Democratic candidate’s excessive sighs and rude interruptions were parodied by Saturday Night Live in a classic spoof. (SNL’s Al Gore: “Jim, I’d like to interrupt here and answer that question as if it were my turn to speak.”)

This past Sunday, previewing Wednesday’s debate, Stephanopoulos even raised the topic with Donna Brazile, who was Gore’s campaign manager that year: “I know for a fact that everyone on your team thought that he cleaned George Bush’s clock in that debate, but on mannerisms and, on the takeaway, he ended up losing.”

Only after the second debate in 2000 (October 11) did Stephanopoulos see a Republican winning: “Governor Bush had a very, very strong night tonight and probably won the debate, in part because as you said, he looked so surefooted on foreign policy.” But Stephanopoulos also insisted: “Vice President Gore, no mistakes — no obvious mistakes at all. But he didn’t really get a chance to talk about his issues.

Since that date nearly 12 years ago, Stephanopoulos has been a consistent champion for the Democrats’ presidential candidates, crowning John Kerry the winner three times in a row and doing the same for Barack Obama in 2008. Below are the quotes and attribution for clips used in the compilation video, starting with Stephanopoulos’s post-debate analysis of the 2000 presidential debates:

# STEPHANOPOULOS (October 3, 2000): I really think if you look at the totality of the questions, there wasn’t a single issue, with perhaps the exception of the energy question, where Gore lost on points over the course of the 90 minutes. He was strong, he was detailed, he was specific, and he posed questions to Bush that Bush left on the table.

# STEPHANOPOULOS (October 3, 2000): Gore dominated the debate...Even the way that he would interrupt Jim Lehrer and say, ‘Listen, I want one more word.’ He looked like he was dominating and, then again, the issues that the time was spent on — prescription drugs, education, Social Security, even the RU-486 and abortion issue — all of those favor Gore.

# Anchor PETER JENNINGS (October 17, 2000): George, I think that Mr. Gore’s campaign will be fairly happy at least with the fact that he performed tonight as they had wanted him to perform.
STEPHANOPOULOS: No question about it, Peter. A mix of drawing sharp contrasts on the issues, but also seeming loose and engaged and human, and talking directly to the cameras. I also think they’re going to be very happy, Peter, with the fact that Gore seemed to know some of Bush’s proposals and facts about his record better than Bush did himself.

# STEPHANOPOULOS (September 30, 2004): Tonight was a big opportunity for Senator Kerry. He was up on the stage as an equal to the President. And over 90 minutes, he gave substantive responses to the charges that the President made. But I wonder if stylistically he helped himself even more than substantively. If by appearing calm and confident for the most part, during this debate, he answered the flip-flopper charge with his demeanor even more than with his words....

# STEPHANOPOULOS (October 1, 2004): I think the most important thing that Senator Kerry did stylistically last night is he showed strength in his demeanor. I guarantee you that if you didn’t speak English, you walked in and watched the debate last night without the sound on, you would believe that John Kerry was the incumbent, was the president.

# STEPHANOPOULOS (October 8, 2004): My gut tells me that President Bush helped himself personally by having an improved performance but that Senator Kerry’s campaign is helped more overall because the issues are turning in his direction. And he’s the challenger and he’s now had two debates where people have seen him as either a tie or a win. A credible alternative at a time when you’ve had job loss, when a majority of the country thinks we’re going in the wrong direction, that’s very good news for the challenger.

# STEPHANOPOULOS (October 14, 2004): What this shows, basically, is that John Kerry, in three debates, had three wins even though last night was narrow. And I think that’s the important point, to look at the debates as a whole. If you look at three presidential elections where the challengers come in behind going into the debates and left ahead, 1960, 1980, 2000, that person went on to win the presidency.

# STEPHANPOULOS (September 26, 2008): Let’s take Obama first.... He comes in at a significant disadvantage on commander-in-chief. People wonder whether he as this experience to be President, to handle national security and I think on answer after answer after answer, he showed confidence, he showed toughness and he showed he belonged on that stage.... Bottom line, the winner is Barack Obama.

# STEPHANOPOULOS (October 7, 2008): Obama is two for two.
Nightline anchor TERRY MORAN: He’s two for two because you had him winning the first one.
STEPHANOPOULOS: He definitely won tonight. I think, again, he showed over the course of this debate, over the course of the two debates, he is answering the number one question Americans have about him. Does he have the experience it takes to serve effectively as President? Over the course now of three hours of debates, he is answering that question minute by minute.

# STEPHANPOULOS (October 15, 2008): But, look, Barack Obama handled this all very, very well. He was cool under attack. He explained away every attack, responded well....
TERRY MORAN: All right, so, bottom line, who won the third and final debate here, George?
STEPHANOPOULOS: Clean sweep for Barack Obama. He has won every debate. He won tonight by staying cool under pressure. He won tonight by parrying the attacks of John McCain. The only thing that John McCain could have really done tonight to change the tenor of this campaign was to get under Obama’s skin, to force him into an error. That did not happen tonight. Another win for Barack Obama. 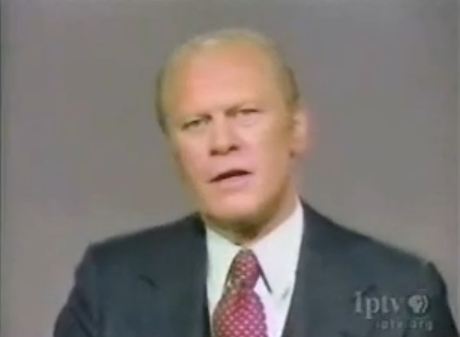 The classic case proving the influence of the news media’s post-debate spin was after the second presidential debate in 1976, when overnight polls showed most viewers thought Gerald Ford beat Jimmy Carter. But post-debate news coverage fixated on Ford’s statement that Poland was free from Soviet domination, and subsequent surveys showed the public shifting to the view that Carter had won.

That year, political scientist Doris Graber conducted a long-term panel study of voters to track how their opinions were influenced by news coverage. After that debate, a woman in her survey group confessed: “I thought that Ford had won, but the papers say it was Carter. So it must be Carter.”

The news media’s post-debate spin matters. If reporters want to show that a candidate has “won,” news coverage will re-play their best statements and portray them as surging in support. If the media line is that a candidate has “lost,” the replay loop will feature gaffes or misstatements, and they’ll be portrayed as on the ropes. For viewers/voters who haven’t made up their minds, the media spin may be a crucial factor.

With friendly umpires like Stephanopoulos calling the balls and strikes, the Obama campaign will have an easier time managing the post-debate spin. If the media were really as centrist as they claim, Stephanopoulos’s bias would stick out like a sore thumb. But at ABC, CBS and NBC, his predictable spin on behalf of the Democrats is, sadly, business as usual.