When President Obama picked Elena Kagan to replace Supreme Court Justice John Paul Stevens, the broadcast networks referred to the upcoming Senate confirmation process as “contentious” a “meat grinder” and a “battle,” warning Kagan was “in for a fight.”

But a Media Research Center analysis of the ABC, CBS and NBC evening newscasts in the six weeks since Kagan was nominated shows the broadcast networks have failed to cover the “fight,” and have ignored most of the controversies that could lead to suspenseful hearings next week.

MRC analysts found that the broadcast network evening newscasts aired just eleven stories about Kagan since her May 10 nomination (six on CBS, three on ABC and two on NBC), plus another three brief items read by the anchor. All but one of those stories appeared during the first week after Kagan’s selection; only the CBS Evening News, in a June 3 report, has bothered to cover any of the thousands of pages of Kagan documents released in recent weeks.

Both CNN and FNC provided substantially more coverage of Kagan during their 6pm ET news programs (10 full stories on CNN’s The Situation Room, 11 on FNC’s Special Report) and offered in-depth coverage of Kagan controversies that the broadcast networks glossed over.

The NBC Nightly News hasn’t mentioned Kagan since she met with senators on May 12; ABC’s World News hasn’t said a word about Kagan since May 16. For its part, the CBS Evening News aired one item on Kagan on June 3 aimed at bolstering the nominee against complaints from the Left that she isn’t liberal enough: 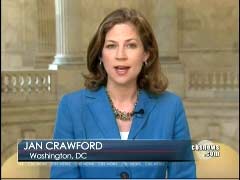 CBS’s JAN CRAWFORD: Elena Kagan has kept her cards so close to the vest that some on the left have worried she’s too moderate....But documents buried in Thurgood Marshall’s papers in the Library of Congress show that, as a young lawyer, Kagan stood shoulder to shoulder with the liberal left, including on the most controversial issue Supreme Court nominees ever confront: abortion.

Crawford did acknowledge Kagan’s overt liberalism might wind up hurting her nomination: “While that may encourage liberals, it’s going to give Republicans a lot more ammunition to fight against her.” But neither CBS nor the other broadcast networks offered a follow-up, even as thousands of documents from Kagan’s stint in the Clinton White House were revealed.

The networks’ disinterested approach to this year’s Supreme Court “battle” is at odds with how they covered the run-up to the hearings of the last two Republican nominees, when ABC, CBS and NBC all ran multiple stories in the weeks before each set of hearings began.

The August 4, 2005 CBS Evening News amplified the Left’s criticisms of Roberts, including a soundbite from “Alliance for Justice” chief Nan Aron, who hysterically claimed material released up to that point “raises red flags about his commitment to civil rights, women’s rights, laws that have been in place for decades.”

This time around, these same networks have failed to grant as much as a soundbite to any representative of a conservative group to talk about Kagan over the past six weeks. And the networks have aired no stories conveying GOP complaints about the need for additional Kagan documents from the National Archives or Clinton library.

As for controversies, both CNN and the Fox News Channel have offered detailed reports about topics that the broadcast networks have either ignored or downplayed:

■ Kagan’s Princeton papers: CNN and FNC discussed Kagan’s senior thesis on the demise of the Socialist Party in the early 1900s, which she labeled “sad.” FNC’s Shannon Bream and CNN’s Lisa Sylvester both included soundbites from experts suggesting, in the words of Sylvester, that “it’s hard to conclude she herself is a socialist, more of a historian documenting a political movement.” 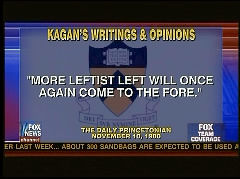 But only FNC’s Bream noted Kagan’s op-ed for The Daily Princetonian, where she openly described herself a “liberal” and wailed about the “anonymous but moral majority-backed avengers of innocent life.” Bream added how “Kagan also said she looked forward to a time when a, quote, ‘more leftist left will once again come to the fore.’”

■ Openness to Regulating Political Speech: Both CNN and FNC explored Kagan’s handling of the Citizens United case as Solicitor General. Even though Kagan lost the 5-4 decision, the President had cited that case as an example of her commitment to fighting “special interests seeking to spend unlimited money to influence our elections.”

On Special Report, Fox correspondent Major Garrett included a quote from Citizen United’s David Bossie saying Kagan offered “a fundamentally flawed view of the First Amendment, and I think it disqualifies her from the high court.” But CNN’s Kate Bolduan stuck to a positive recounting of Kagan’s style, saying her oral argument showed “she is light on her feet,” “clearly an intellectual” with “quick wit and personality.”

As for the networks, ABC’s Jake Tapper and CBS’s Jan Crawford on May 10 made passing references to the case, but none of the broadcast networks explored the details of that case or suggested Kagan’s legal arguments showed a hostility to free speech.

■ Kagan’s ban on military recruitment. As Dean of the Harvard Law School, Kagan blocked the U.S. military from using the school’s Office of Career Services because of the ban on open homosexuals serving in the armed forces, a policy Kagan said she “abhorred.” CNN’s Lisa Sylvester offered an in-depth story on May 11, followed by a debate between Lawrence Korb from the liberal Center for American Progress and conservative Frank Gaffney. FNC offered its own story on May 11, quoting two conservative critics of Kagan vs. White House chief of staff David Axelrod and a gay veteran who supported Kagan’s stance.

As for the broadcast networks, ABC and NBC limited themselves to a couple of sentences referencing the controversy on the day Kagan was picked. CBS also mentioned the matter on  May 10, with additional coverage on the May 16 Evening News. Reporter Jan Crawford’s tone was sympathetic: “Kagan, like many law school officials, opposed having military recruiters on campus....”

In the past, when liberal organizations chose to do “battle” with a Republican appointee to the Court, the networks chronicled the effort and showcased the complaints of left-wing groups. Now that the shoe is on the other foot, these same networks seem decidedly uncurious about the confirmation “fight” over Elena Kagan.
Double Standards Bias by Omission Kagan Nomination ABC CBS NBC CNN Fox News Channel NBC Nightly News CBS Evening News The Situation Room Special Report World News Tonight MRC Study Sam Alito Elena Kagan