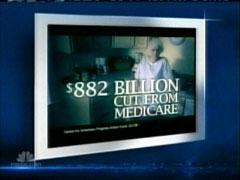 Over the past few days, the Obama campaign has been claiming — both in ads and in statements by Barack Obama himself — that John McCain would “cut” Medicare benefits by “$882 billion,” a charge that the Associated Press called “shaky” and that FactCheck.org bluntly dismissed as “bogus” and “false.”

Yet of the three broadcast networks, only ABC News has thus far joined the condemnation of Obama’s deceptive ad. NBC on Monday would only go so far as to say “McCain’s advisors say that’s not true...” — implying that it’s merely a partisan difference of opinion — while CBS has thus far refrained from questioning Obama’s truthfulness on this issue.

For weeks now, the networks have complained about the McCain campaign’s supposed nasty and unfair campaign attacks against Obama, so when will NBC and CBS join ABC in punishing this nasty and unfair charge from the Democrats?

ABC’s Jake Tapper in a “Fact Check” that aired on Monday’s Good Morning America, as transcribed by the MRC’s Scott Whitlock: 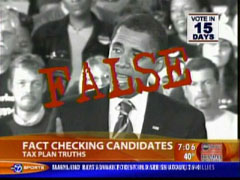 JAKE TAPPER: Good morning, Robin. Well, in the closing weeks of any political campaign, as candidates careen through battleground states in their campaign buses, they tend to leave the facts by the side of the road. In Virginia, Senator Barack Obama launched a new attack, saying John McCain plans to gut Medicare to pay for his health care proposal.

SENATOR BARACK OBAMA: It turns out, Senator McCain would pay for part of his plan by making drastic cuts in Medicare, $882 billion worth.

TAPPER [Big red “FALSE” stamp appears onscreen]: That's false. The $882 billion number comes from a liberal think tank. The McCain campaign says the savings would not come from cutting benefits, but from program changes such as encouraging the use of more generic drugs.

On Friday’s World News Tonight, ABC’s David Wright had slammed the Obama claims as a “distortion,” but gave McCain a verbal kick in the shins at the same time: 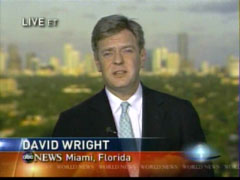 With just two weeks to go until Election Day, Barack Obama is unleashing a three-pronged attack, with his voice, his wallet, and his airplane. The latest front, the new charges about Medicare, claiming McCain would cut spending....It's a sensitive issue in key states with a lot of seniors, such as Florida and Pennsylvania....This new ad is just one of the multimillion dollar barrage from the Obama campaign. He has spent about $60 million more on ads than McCain. And he's outspending him three to one in Virginia, four to one in Florida, and eight to one in North Carolina.

On Monday’s NBC Nightly News, in a longer piece about the candidates’ health policies, reporter Mark Potter raised the issue Obama’s ad but would not condemn it as factually flawed: 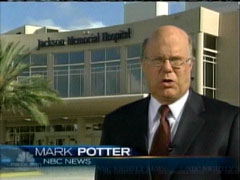 POTTER: A recent Obama ad running in Florida and other states...

POTTER: ...accuses McCain of threatening to cut Medicare benefits. But McCain's advisers say that's not true, arguing any cuts in Medicare spending will only come from attacking waste and fraud. Despite its importance, though, neither candidate has made Medicare a campaign priority.

Obama's charge is built on a shaky foundation. The campaign's evidence that McCain would make such cuts relies on a Wall Street Journal article where no specific cuts were mentioned.

In what little detail McCain discusses Medicaid and Medicare on his campaign Web site, he makes no mention of cutting benefits. He says this about the two health programs, the first for the poor, the second for the elderly and disabled: "We must reform the payment systems in Medicaid and Medicare to compensate providers for diagnosis, prevention and care coordination. Medicaid and Medicare should not pay for preventable medical errors or mismanagement."

Then on Monday, FactCheck.org’s Brooks Jackson came out even stronger against the Obama claims:

In a TV ad and in speeches, Obama is making bogus claims that McCain plans to cut $880 billion from Medicare spending and to reduce benefits.

● A TV spot says McCain's plan requires “cuts in benefits, eligibility or both.”

● Obama said in a speech that McCain plans “cuts” that would force seniors to “pay more for your drugs, receive fewer services, and get lower quality care.”

These claims are false, and based on a single newspaper report that says no such thing. McCain's policy director states unequivocally that no benefit cuts are envisioned. McCain does propose substantial “savings” through such means as cutting fraud, increased use of information technology in medicine and better handling of expensive chronic diseases. Obama himself proposes some of the same cost-saving measures. We’re skeptical that either candidate can deliver the savings they promise, but that’s no basis for Obama to accuse McCain of planning huge benefit cuts.