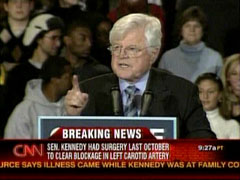 During Saturday’s “Breaking News” coverage of Senator Edward Kennedy’s hospitalization for a seizure, CNN anchors Fredericka Whitfield and T. J. Holmes sycophantically referred to the Kennedy family and the Senator himself as “political royalty” and “American royalty,” as if all Americans — or even all in Massachusetts — bend their knee before the throne of Camelot.

While the Bush family, for example, has produced a Senator, two Presidents and a Governor, it’s impossible to imagine that CNN (or any other network) would allow its on-air personnel to casually refer to the family as “royalty.” And while many Americans certainly have high regard for the Kennedys, conservatives and many others staunchly oppose their liberal policies and avoid the kind of hero-worship exhibited by liberals.

Of course, such fawning displays are nothing new when it comes to coverage of the Kennedy family. During coverage of the plane crash that killed John F. Kennedy, Jr., then-CBS anchor Dan Rather promoted the Camelot myth: “It’s just been one tragedy after another for the Kennedy family. Well, you say, every family has its tragedies. True enough. But this family, which is as close as America comes to having royalty...this family has had so much public tragedy.”

At about 12:27pm ET on Saturday, T. J. Holmes claimed the Kennedy name was “synonymous with political royalty” as he noted the statement released by Kennedy’s choice for President, Barack Obama:

As people are seeing there at the bottom of the screen, the quote we're getting from Senator Obama, who has received the endorsement of Ted Kennedy, 'He is one of my favorite people. My thoughts and prayers are with Teddy.' We will keep an eye on this story. Again, Senator Ted Kennedy, the liberal lion of the U.S. Senate, the last name synonymous with political royalty, really, in this country, rushed to the hospital with symptoms of a stroke. We have our eyes on this story, we are all over it, working our sources. Quick break, we'll be right back.

Then, about 20 minutes later, Holmes’ co-anchor Fredericka Whitfield asked reporter Dan Lothian to assess the importance of the Kennedy family in Massachusetts: