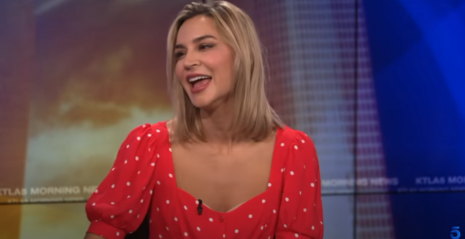 With less than seven weeks remaining before the presidential election on Tuesday, November 3, many liberals in Hollywood have declared their support for Joe Biden, and several have even made significant donations to the Democratic candidate’s campaign. However, that’s not the case with Samaire Armstrong, the TV star who posted a video on Wednesday in which she pledged to back President Trump in part because a “far-left mob” had silenced American conservatives.

According to an article posted by Naledi Ushe, a writer/reporter for the Fox Corporation, the 39-year-old actress stated:

I’m voting #Trump2020, and this is why. This is MY opinion. I am sharing it with you at the cost of everything because it is my right.

There are so many in our great country who have been bullied into silence at the doing of a far-left mob.

Armstrong, who portrayed college student Anna Stern in The O.C., didn’t stop there.

The actress encouraged her online followers to “stop placating to the emotionally undeveloped, who have an inability to process the meaning of personal responsibility, as if they are the cultural guide of which we should follow.” After declaring herself an Independent and not a Republican, she noted that three significant aspects of the country must be restored: freedom of speech, logic and critical thinking.

Armstrong continued: “I have deep love for every one of my fellow humans. Every race, color, creed, gender, political back ground, religious background, financial background, must have their OWN voice and opinion, and it MUST be allowed to be spoken.” In addition, she called former Democratic presidential nominee Hillary Clinton, Biden and his running mate Senator Kamala Harris “out of their minds.”

The actress also slammed former President Barack Obama’s lack of effectiveness when dealing with social justice issues and economic policy. “They're not doing anything -- and that's why they hate Trump so much,” Armstrong declared.

“Donald Trump isn’t even technically a Republican himself,” she stated. “He’s always socially at heart been a Democrat -- a liberal, I should say. Because he believes in social equality. So this fallacy that he’s an evil, racist bigot is f--king bulls--t.” As if that wasn’t hostile enough, Armstrong also questioned the “narrative” surrounding the coronavirus pandemic and described climate change as “an exaggeration.” She added that supporting the science and questioning the “narrative” aren’t mutually exclusive.