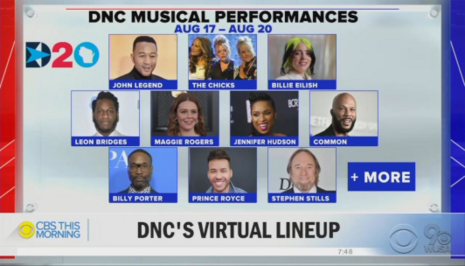 Gil Kaufman of the Billboard website quoted DNC program executive Stephanie Cutter in an article on Friday: "In just three days, we will kick off a [c]onvention that will look and feel very different” from past events.

It will truly be a convention across America, and these incredible [people] will help us tell the story of where we are as a country today under Donald Trump’s failed leadership and the promise of what we can and should be with Joe Biden as president.

These artists [and speakers] are committed to engaging with, registering and mobilizing voters to get us over the finish line in November.

Also performing is the band The Chicks. Ever since they condemned George W. Bush in 2003, the group has got lots of love from the liberal media.

Kaufman also stated: “The artists are expected to perform everything from the National Anthem to American classics and new songs, with Monday night kicking off with a performance of the Star Spangled Banner by a 57-member youth choir made up of performers from across the country, with each member representing one of the 57 states and territories” in the nation.

Due to the COVID-19 pandemic, the convention was postponed from an earlier summer date to mid-August, with the performers expected to dial in remotely and Biden accepting the nomination on Thursday from his home in Delaware.

Kaufman noted that each two-hour lineup will include a variety of artists beginning at 9:00 p.m. from Monday through Friday. The slate will contain a roster of national Democratic leaders ranging from senators Amy Klobuchar of Minnesota to Bernie Sanders from Vermont and Elizabeth Warren of Massachusetts.