Even though Special Counsel Robert Mueller’s report found no evidence of against President Donald Trump to indict him for collusion with the Russian government, Attorney General Bill Barr continues to examine what “merciless” part the media played in that investigation.

According to an article posted on Monday by Sarah Lee, a Washington contributor for the RedState.com website, "Barr continues to insinuate that people in the press may have played a more-than-inconsequential role in the dissemination of the rumor and innuendo that would ultimately feed the Russia collusion investigation into the 2016 Trump campaign."

Lee reported The Washington Times recently listed a number of examples of stories that appeared in 2017 following a speech that candidate Trump had given at DC’s Mayflower Hotel in April 2016 in which Trump, Russian Ambassador Sergey Kislyak and then-Sen. Jeff Sessions were all in the same room. The flurry of stories, Barr suggests, may have helped push the now-debunked narrative that the Trump campaign was colluding with Russia.

He told Sen. Ted Cruz, on his “Verdict with Ted Cruz” podcast, that media was “merciless” in pushing the Russia collusion narrative.

“One of the stunning things, I’m sure you’ll agree, is that the media just went hellbent for leather on pushing this Russiagate story that Trump was essentially an agent of Russia,” Barr told the Senator. “And they were merciless. And up until recently you had former senior government officials sort of talking knowingly about how the president was going to be indicted and so forth and so on. Is there anyone standing up now saying that President Trump is an agent of a foreign power? Whoops. They got it wrong. And you wouldn’t know that ‘cause there has been no retraction, no readjustment by the media. … They’re just on to the next false scandal because their purpose seems to be to cripple this administration and drive it from office at any cost.” 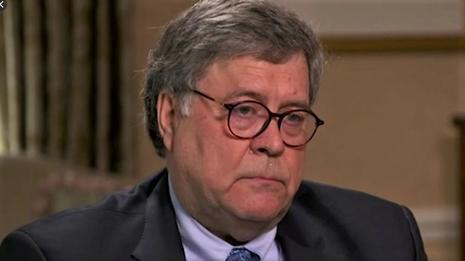 Barr said something similar to Maria Bartiromo on Fox's Sunday Morning Futures on June 21: "I agree with you that it's been stunning that all we have gotten from the mainstream media is sort of bovine silence in the face of the complete collapse of the so-called Russiagate scandal, which they did all they could to sensationalize and drive. And it's, like, not even a whoops. They're just onto the next false scandal. So, that has been surprising to me that people aren't concerned about civil liberties and the integrity of our governmental process."

As Lee concluded: "Barr’s continued insistence that the press played a role is at the very least encouraging in that it’s an attempt to hold media accountable at least to public scrutiny."