NY Times: Boycott Your Own Relatives Until they Get Woke, Donate Money 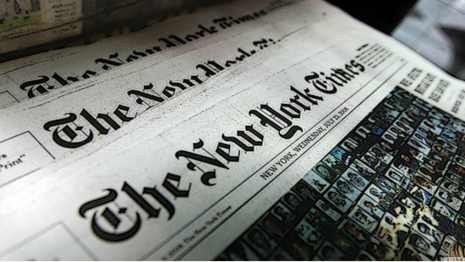 Stop calling, texting and talking to your less-civilized relatives until they wise up and get woke. That's the conclusion of the far-left New York Times. According to an article posted on The Right Scoop: the people at the Times did their best to convince others to clamp down on those who are not as “woke” as they are, an effort the website reporter derided as “pathetic.”

Sanders then listed “three suggestions on more immediately impactful things to offer instead:” The first item was money, which should be used to “pay legal fees for black people who are unjustly arrested, imprisoned or killed or to black politicians running for office.” Second was texts, which would go to “your relatives and loved ones, telling them you will not be visiting them or answering phone calls until they take significant action in supporting black lives either through protest or financial contributions.”

The final suggestion was for protection, which should go to “fellow black protesters who are at greater risk of harm during demonstrations.” “Yes, these actions may seem grave,” Sanders noted. “But you insist that you love me, and love requires sacrifice." “If you’re feeling the need to check on me as your black friend, don’t,” he continued. “I’ll let you know what I need. If you don’t get a message from me, that’s a message.”

It wasn’t long before Mark Hemingway, a senior writer at RealClearInvestigations, responded by tweeting:

Today, The New York Times ran an op-ed telling people to withhold affection from their relatives unless they protest or give money to anti-racism organizations.

Where does this end? I want racial equality, but I utterly disdain any person or institution endorsing such tactics.

Considering that this is the same paper where a top editor had to resign for daring to publish an op-ed by a Republican senator, maybe The New York Times should focus on its own problems?