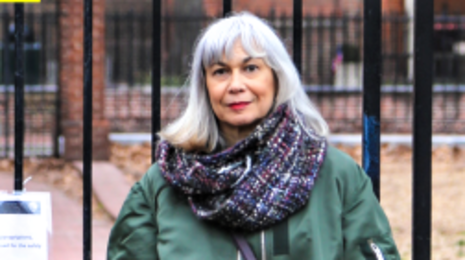 The New York Times wasn't the only newspaper that had a staff revolt over a critique of racial rioting in recent days. A headline on a piece by Philadelphia Inquirer architecture critic Inga Saffron infuriated reporters of color at the newspaper and caused many of them to boycott work for a day.

Under the headline “Buildings Matter, Too,” Inga Saffron stated that the destruction of structures matters even when “black Americans are being brazenly murdered in cold blood by police and vigilantes.” The article was quite sensitive to black lives, but it didn't matter.

Saffron hit the usual mark: “Black people have been the victims of systemic oppression in America for 400 years, but video footage and social media have now made it impossible to deny how bad things really are. The grotesque killings of George Floyd, Ahmaud Arbery and Breonna Taylor -- and many others before them -- are attacks on the fundamental promise of our democracy.” But she also wrote that neighborhoods in Philadelphia have yet to recover 50 years after rioting, but facts matter less than feelings.

"Journalists of Color" on the staff then sent a letter to their leadership that indicated:

We strive to be the voice of the people. And we are tired. We are tired of hasty apologies and silent corrections when someone screws up. We’re tired of workshops and worksheets and diversity panels. And we're tired of working for months and years to gain the trust of communities -- communities that have long had good reason to not trust our profession -- only to see that trust eroded in an instant by careless, unempathetic decisions.

The Inquirer changed the headline and added and Editor's Note:

Editor’s Note: A headline published in Tuesday’s Inquirer was offensive, inappropriate and we should not have printed it. We deeply regret that we did. We also know that an apology on its own is not sufficient. We need to do better. We’ve heard that loud and clear, including from our own staff. We will.

They also published a larger apology about a two-hour staff meeting to hear complaints about it, that buildings don't matter as much as lives: 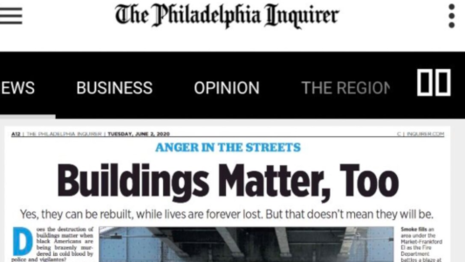 While no such comparison was intended, intent is ultimately irrelevant. An editor’s attempt to capture a columnist’s nuanced argument in a few words went horribly wrong, and the resulting hurt and anger are plain...

Finally, we apologize to Inquirer journalists, particularly those of color, who expressed sadness, anger, and embarrassment in a two-hour newsroom-wide meeting Wednesday. An enormous amount of pressure sits on the shoulders of black and brown Inquirer journalists, and mistakes like this, made by the publication they work for, are profoundly demoralizing. We hear you and will continue to listen as we work to improve.

In less racially fraught times, the Inquirer doesn't have the same problems with racial analogies... when attacking Republicans. In 2017, Scott Whitlock highlighted that left-wing  Reagan-loathing columnist Will Bunch trashed the Republican tax-cut bill under the headline "How the GOP produced the worst bill since the Fugitive Slave Act of 1850."