After Hot TV Rage, MSNBC President Softens Political Coverage to ‘Give Bernie His Due’ 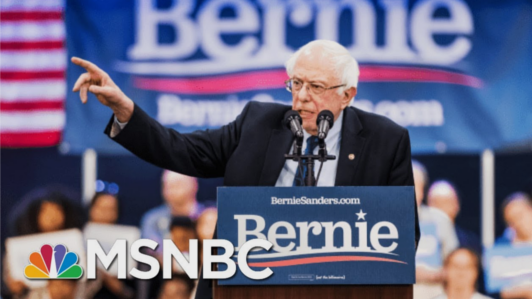 Bernie Sanders may be winning the Democratic presidential race right now, but he’s very unhappy with MSNBC, especially after Chris Matthews compared his victory in the Nevada caucuses to the Nazis overtaking France in World War II.

Vanity Fair media reporter Joe Pompeo offered a dramatic opening to his Sunday report on what’s brewing over at MSNBC: “The pundit apocalypse has been gestating for a few weeks -- but it took the shock waves from Bernie Sanders’s Nevada victory to fully set it off.”

Faced with a wave of #FireChrisMatthews tweets, Matthews scrambled to apologize on Monday. That’s not the only accomodation MSNBC is offering. Pompeo reported MSNBC president Phil Griffin’s phone burned up with complaints. The liberal network moved to fix this breach.

MSNBC took Sanders’s El Paso and San Antonio rallies live on Saturday, and that Sanders people like campaign manager Faiz Shakir and former campaign manager Jeff Weaver both received airtime on Monday. “The Sanders team is in contact with our senior management,” one source said, “and they are heard. Phil is doing his best to give Bernie his due.”

Pompeo reported MSNBC management is sensitive to reaction to its apocalyptic reaction to Sanders becoming the front-runner. “He’s winning,” so they have to soften it up.

Now, with Sanders looking more and more like the presumptive nominee, MSNBC’s coverage will have to shift to reflect that. “Will they bring in more contributors that are pro-Sanders? That’s where the chatter is,” another insider told me. “As a matter of news, you have to. Management is sensitive to it, that he is now very possibly gonna be the nominee. He’s winning.” I ran that notion past a network executive. “Yes, the race has changed over the last couple of weeks, and we are going to reflect that and make adjustments,” he said.

“One easy way to do that is to seek out more smart, pro-Sanders voices from people who can make our coverage more insightful.” But, the executive added, “Their campaign, like any other, is due fair coverage, not fawning coverage.

Does anyone think that’s what MSNBC gave Obama? “Fair coverage, not fawning coverage”? No one forgets the thrills up their leg.