For many comedians these days, vulgarity equals comedy. Gone are the times when anyone could enjoy a stand-up routine with the rest of the family.

That was certainly the case when Trevor Noah used the latest edition of The Daily Show on Comedy Central to slam Donald Trump for canceling a meeting between himself and terrorists from the Middle East, which the host claimed demonstrates that the President is a “pu*** a** bi***.”

Noah began his screed by blaming Trump for his clash on Twitter with John Legend and the musician’s wife, model Chrissy Teigen. “That’s right,” the comic stated. “Donald Trump lashed out” at Legend and Teigen “because he feels like they’re taking credit for achieving criminal justice reform instead of giving him the praise.”

Of course, the couple “both hit back” at the “Commander-in-Tweet,” and Noah displayed Legend’s response:

Imagine being president of a whole country and spending your Sunday night hate-watching MSNBC, hoping somebody -- ANYBODY -- will praise you.

Melania, please praise this man. He needs you.

However, the liberal comedian noted that Teigen’s response was “too vulgar for the news to repeat.”

Luckily, he stated, “we’re not the news,” a joke that drew laughter and applause from the studio audience.

Trump identified Teigen as “Legend’s filthy-mouthed wife, but because he didn’t have the guts to tag her on Twitter, she called him a ‘pu*** a** bi***.’”

Noah then turned his attention to the Taliban by stating that he actually understands why the terrorists “didn’t want to come to America." First, he claimed, the people in the Taliban “don’t trust the United States, which I understand. They’re like: ‘We’re not coming there’ and they also ‘probably don’t want to deal with the TSA,’” the Transportation Security Administration.

That agency has the authority to monitor the security of the traveling public. It was formed after the terrorist attacks on September 11, 2001, in New York City, the Pentagon and southwestern Pennsylvania.

Noah then joked: “Can you imagine how stressful that s**t’s going to be for them? They’re just going to come in … as the Taliban?” 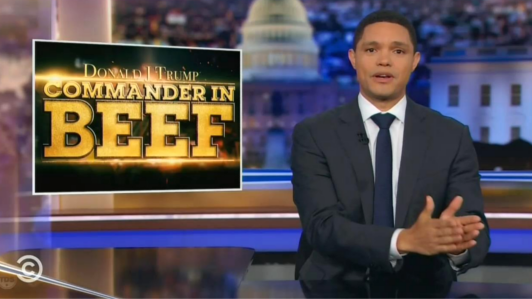 “So the Taliban refused to come to America, and Trump tweeted out: ‘No, I’m breaking up with you guys,’ and so there is a possibility that the war in Afghanistan will continue now because Trump has put a photo opportunity above peace.”

As if this was not hostile enough, Noah noted:

And I think the more we talk about it in society, the more we can destigmatize this serious disease.

Also in the segment, the comedian described the President’s “beef” with the Taliban by jokingly referring to the WebMD website as defining his condition as “a classic symptom” of being a “p***y-a** b**ch.”