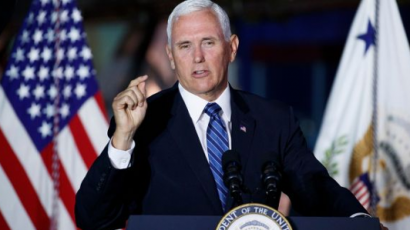 Visits by foreign officials usually pass smoothly and quickly, but that wasn’t the case when conservative Vice President Mike Pence met with Ireland President Michael Higgins and Taoiseach (Prime Minister) Leo Varadkaron on Tuesday. Columnist Miriam Lord didn’t hold back when she hammered the visit for the Irish Times newspaper.

In fact, Lord compared the visit to “pulling out all the stops for a much-anticipated visitor” and compared the event to thinking “it has been a great success until somebody discovers” that he “sh*t on the new carpet in the spare room, the one you bought specially for him.”

Of course, the columnist slammed Pence for praising current British Prime Minister Boris Johnson, who supported the withdrawal of the United Kingdom from the European Union, which happened in June of 2016.

Lord also stated that Pence’s praise “came as a shock” after three years of Ireland suffering from “Brexit worry” even though the Irish hosts “made a big fuss of [Pence’s] family" and even “said a special prayer for everyone, and then, just before he left, he turned around and kicked them where it hurts.”

After all, Lord noted, Pence “is Irish American and wastes no opportunity to go misty-eyed about his love for the ‘Old Country’” and “couldn’t praise Ireland enough on Tuesday,” when he noted that he was ‘deeply humbled’ and ‘honoured’ to be going to the hometown of his mother’s grandmother and so on.”

The Vice President left no room for doubt, she stated, while “Irish eyes definitely stopped smiling. It was clear he was channeling His Master’s Voice, and President Donald Trump is  … a fan of Brexit and of Boris.”

“And this, after such a lovely morning,” Lord continued.

Instead, she stated, Pence “veered off his rather gushing statement following his meeting with the Taoiseach into some crunching Brexit remarks.”

As the air in the steamy ballroom turned decidedly frosty, Pence urged Ireland and the European Union “to negotiate in good faith” with the new British prime minister.

The local crowd raised eyebrows and wondered what he thinks the aforementioned EU has been doing for the last three years, if not negotiating in good faith with the U.K.

“Varadkar’s expression didn’t change,” Lord added. “He stood on the platform beside the Vice President and hardly flinched, smiling politely.”

However, “international diplomacy is what it is, and in the context of going about their nations’ business, everyone has to be seen to get along.” even though Higgins had a “sprayed-on smile."

At that point, the Vice President “sat at the table and began to write” in the visitors’ book as “the silence got louder” until “thank God, Pence stopped writing,” which was “a relief all round.”

Of course, “the talks between the President and the Vice President didn’t take long. Soon, they were waving goodbye from the portico,” the columnist added.

“We have both been blessed with Irish mothers,” Pence told the Taoiseach when they met the press. “I carry Ireland with me wherever I go.”

In conclusion, the columnist avoided any further references to manure as she sneered: “God bless America.”