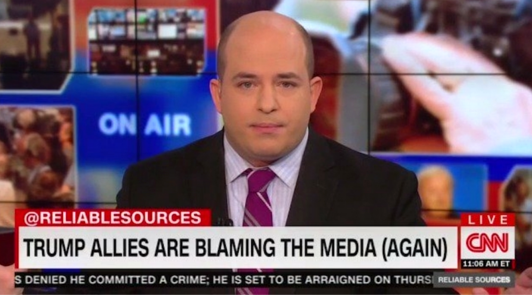 Brian Stelter, host of the Reliable Sources program on CNN, apparently didn’t take the Labor Day holiday off, instead writing an article warning people that "President Donald Trump and his allies tell the public almost daily not to believe real reporting. But the frequency and predictability of the attacks don't make them any less damaging. To the contrary: The falsehood-filled tweets and televised tirades are gradually eroding Americans' shared sense of reality."

Actually, the article the CNN correspondent posted that day read more like an editorial than a news report. The headline was "Why Trump's constant attacks on an independent press are so dangerous."

Monday was a prime example. Trump shared 22 posts on Twitter before noon. In between his quotes from Fox News and his retweets about Hurricane Dorian, he blasted the Washington Post and spread misinformation about how major newsrooms operate.

He also shared a key line from his re-election playbook, claiming that "our primary opponent is the Fake News Media," not the Democrats.

Some of what Trump posts about the media is legitimate criticism, but much of it is misleading. At the root of it all is a lie: That legitimate news outlets are "fake."

Stelter is upset that Trump says "journalists routinely make up sources out of thin air, for example, he has no proof for the charge."

But Stelter didn’t note that the source he quoted is “anonymous” and therefore cannot be proven. Media outlets that use anonymous sources would refuse to prove that the sources are real. That's why they're anonymous.  We don't know anything about the sources, whether they are highly placed or not, or more importantly, if they have a personal/political reason to unload in these stories. We don't know whether sources are betraying the trust of their employer by spilling the beans...unless their "off the record" conversations suddenly go on the record.

Apparently you can't question the media's ethics when they're not transparent.

The LameStream Media has gone totally CRAZY! They write whatever they want, seldom have sources (even though they say they do), never do “fact checking” anymore, and are only looking for the “kill.”

They take good news and make it bad. They are now beyond Fake, they are Corrupt.

Of course, Stelter noted that “Monday was a prime example” because the President “either misunderstands how the press operates or is misleading people on purpose.”

Trump “has been saying that for years, and he's been corrected for years, so at this point the latter is more likely,” the host stated.

Also in his article, Stelter used a quote from Mark Follman, national affairs editor for the leftist magazing Mother Jones (no label), who reported last week that "Trump's incessant war on the American press has grown more extreme as his presidency has gone on."

Follman is quoted as saying that while the tactics "represent an inherently dangerous attack on a pillar of our constitutional democracy, Trump's multiyear campaign against the press appears to have been no more successful a project than, say, Trump Tower Moscow."

In addition, the President “sometimes seizes on ethical lapses to bolster his case -- a form of argument by anecdote that is certainly persuasive to his fans but isn't factually sound.”

Not factually sound? As NewsBusters reported last week, Lawrence O’Donnell -- host of The Last Word on MSNBC -- was condemned for having a single anonymous source accusing Trump of getting loans that were cosigned by Russian oligarchs.

Stelter noted that O’Donnell “was widely criticized for the misstep,” which led to his apology a few days later.