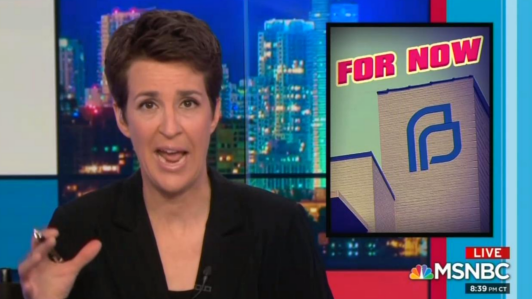 Sixteen months ago, The Rachel Maddow Show on MSNBC surpassed the ratings of rival Sean Hannity on the Fox News Channel, and people wondered if the liberal network might actually replace the top-rated TV news source.

That situation has changed dramatically, and on Tuesday, the Nielsen company released ratings for July, in which Hannity was declared the top-rated program in cable news for the fourth month in a row while Maddow slid to fifth place in the 9 p.m. time slot.

In an article posted by Mark Joyella, the senior media contributor for Forbes magazine declared:

It's been more than a year since MSNBC's star host Rachel Maddow beat Fox News Channel's top-rated host Sean Hannity to take the title of most-watched host in all of cable news.

At the time, March 2018, The Rachel Maddow Show finished in first place with an average total audience of 3.058 million viewers -- the show's best-ever performance in the 9 p.m. ET hour.

Over at Deadline.com, writer Dominic Patten, stated, “MSNBC's ratings had been climbing, up 30 percent in the first quarter of 2018, while ratings for FNC and CNN were down.”

However, during the next six months, Hannity “pushed Maddow out of first place” even though “there seemed to be a refreshed competition between the two prime-time hosts.”

But last month, Maddow had a total audience of just 2.5 million, which is far behind Hannity’s viewership of 3.3 million.

The FNC boost also benefited other weekday shows, including Tucker Carlson Tonight, which was watched by 3.1 million, The Ingraham Angle with 2.5 million and The Five (also 2.5 million).

Joyella added that the five top cable news shows finished in the same order among viewers from 25 to 54 years of age, the demographic group most valued by advertisers. Hannity drew a total audience in the demo of 527,000 viewers, and Maddow was well behind with 384,000.

“It's the first time since October 2018 that Maddow has finished outside the top three cable news shows among total viewers,” the Forbes contributor noted, while “Fox News posted its 37 straight monthly first-place finish.”

Back at Deadline.com, Patten noted that “July was not a good month overall for the NBCUniversal-owned MSNBC.”

“First,” Patten noted, “top-rated Maddow was down in a month that launched with the outlet hosting the first round of Democratic presidential debates.”

He continued: “MSNBC had its least watched month among the 25-54s since the former Celebrity Apprentice host moved into the White House in January 2017 -- and that’s with Robert Mueller’s much-hyped congressional hearings on July 24.”

As NewsBusters noted in late March, Maddow’s ratings have been in freefall since Mueller’s report didn’t produce any charges against Trump -- despite her constant efforts to twist anything in the news on the GOP official using her many “conspiracy theories.”

When discussing poor ratings, it’s difficult to ignore CNN’s recent collapse. In July, the network’s New Day morning program had its worst month in the key demo in five years. Neverthless, Patten was able to find a silver lining in all the bad news: “[I]n the battle between that top cable newsers that aren’t owned by an Australian mogul, MSNBC beat CNN for the 29th month in a row in total day viewers."