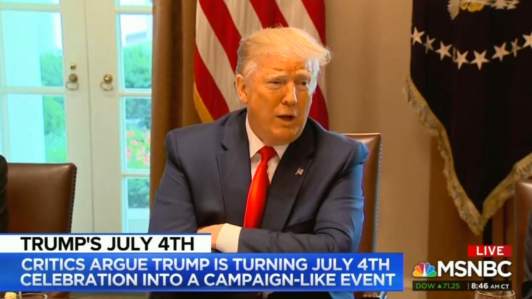 In a move that's not shocking, considering how the mainstream media feels about Donald Trump, MSNBC and the networks will not carry his Fourth of July address to the nation.

Instead, the liberal cable channel and the network news on ABC, CBS and NBC will only show clips from the event, which is still being carried in real time by their respective online and app streaming platforms, as well as the Fox News Channel and C-SPAN.

According to an article by Michael Calderone, senior media reporter for Politico:

The question of whether networks provide airtime comes as Trump’s event has been dogged by criticism for politicizing the typically nonpartisan celebration of America’s independence and militarizing it with fighter jets flying overhead and tanks on the ground.

Trump has said he was inspired by Bastille Day in France, though his desire for tanks rolling through Washington has drawn comparisons to military parades in authoritarian regimes.

Of course, whenever the GOP occupant of the White House takes part in any event, the liberals in the media consider that to be “politicizing” it.

Calderone also noted that a spokesperson for MSNBC stated the network will assess in real time whether to air clips of the event during its regularly scheduled programs, The Beat With Ari Melber and  Hardball With Chris Matthews.

Meanwhile, representatives from the ratings-poor CNN channel did not respond to requests for comment. However, an episode of The Situation Room With Wolf Blitzer is slated to air at 6 o’clock with a “special report” on the rise of white nationalism set to kick in an hour later.

At the other end of the ratings spectrum is Fox News, which will cover the entire event during a two-hour edition of that evening’s Special Report With Bret Baier that will begin at 6 p.m.

Also live that night is C-SPAN, which will start its coverage at 6:15.

However, in an article on the Daily Wire website, reporter Cheyenne Roundtree quoted the President as tweeting:

Big 4th of July in D.C. “Salute to America.” The Pentagon & our great military leaders are thrilled to be doing this & showing to the American people, among other things, the strongest and most advanced Military anywhere in the World.

“Bands will play, and the President will give a speech before the Lincoln Memorial,” the Daily Mall reporter stated.

Despite all these attractions, the reporter added: “NBC will have on NBC Nightly News With Lester Holt and Extra during the time slot, and CBS will run its nightly newscast and Inside Edition.”