THIS MSNBC Show Is the Latest to Tumble in Ratings 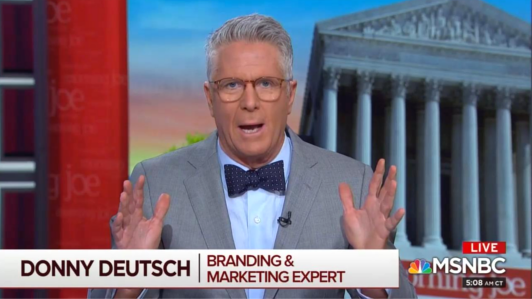 Apparently, the people at the liberal MSNBC channel don’t want their counterparts at CNN to feel lonely in the ratings cellar.

Whether or not that was the motivation for the eight-week debut of the Saturday Night Politics program, the results are still the same: low ratings and little interest in the 8 p.m. show hosted by frequent Morning Joe contributor Donny Deutsch.

According to an article on Mediaite, the show’s “early returns are not promising.”

The post quoted data from the Nielsen ratings website as revealing that “Saturday Night Politics pulled down 749,000 overall viewers in its most recent airing and 82,000 in the advertiser-coveted adults 25-54 demographic.” “Both numbers are down more than 15 percent from the show’s May 4 launch,” the article stated, “which posted 919,000 total and 99,000 in the key demo.”

However, MSNBC’s “silver lining” with the show is that its weak ratings are still an improvement “in the total viewers category year-over-year, averaging 799,000 overall compared to the 584,000 brought in by the O’Donnell reruns in May and June of 2018.”

The article also noted that “the program has a long way to go in order to make inroads against time slot leader Fox News,” when Watters World -- hosted by FNC contributor Jesse Watters -- airs at the same time.

Of course, the most recent episode of Watters’ program drew nearly 1.5 million viewers and 182,000 in the key demographic, more than double the numbers of Deutsch’s program.

As if those ratings weren’t embarrassing enough, cellar-dweller CNN used the time slot to show an “encore presentation” of the documentary Nothing Left Unsaid: Gloria Vanderbilt & Anderson Cooper to mark the celebrity’s passing with her son, one of the network’s weeknight anchors.

As NewsBusters reported in mid-May, Deutsch has no shame when it comes to slamming Republicans and praising Democrats. He used a guest appearance on The 11th Hour to claim President Trump is a “sociopath” who won’t leave office if he loses the 2020 presidential election.

Of course, part of Deutsch’s problem is attracting viewers who want to discuss politics on Saturday evening, when most people are engaged in activities that are far less serious than that.

But given the liberal tilt of this week's Democratic debate, it's no shock that MSNBC would think someone like Deutsch is a great choice for a show.