Deranged Cher Calls for Trump to Be Sexually Assaulted in Prison 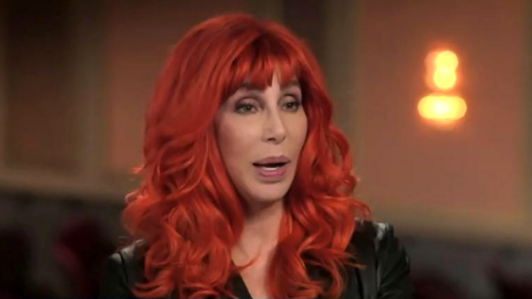 It’s truly amazing just how low liberal Democrats are willing to go to express their constant, intense, and sometimes violent, hatred of President Trump. The latest example of this comes from leftist singer Cher.

Earlier this week, the celebrity tweeted in no uncertain terms that she would like to see the President arrested and thrown in prison, where he should be sexually assaulted by a fellow inmate.

Even though the 73-year-old liberal has received a negative backlash from her message, she is refusing to apologize for her caustic outburst. However, she offered a clarification, calling her remarks a “Cher wtf moment.”

(Editor’s Note: The grammar and capitalization from the tweets are original to what Cher wrote.)

The original post has since been deleted, but the Daily Mall newspaper quoted her as tweeting:

Been Giving IMPEACHMENT MUCH Thought Throughout The Day,& I Would *love* 2 See trump Impeached,Brought 2 Trial, *locked* Up In *prison* & Toy Boy [of] Big Bubba!!

My Delight In Seeing trump Run Out Of Town On a Rail, Is More Likely *heart* over *brain*. I WANT WHAT'S BEST 4 DEMOCRATS AND DEMOCRACY.

It didn’t take long for British TV host Piers Morgan to fire back by calling the post “disgusting” and noting that “if she’d said it about Obama, she would never work again.”

Nevertheless, the performer replied she was not apologizing but asserted that she doesn’t usually delete her tweets before noting: “What I Thought Of As Stupid Joke'On Paper',Went 2 Far.” Here is her follow-up tweet: 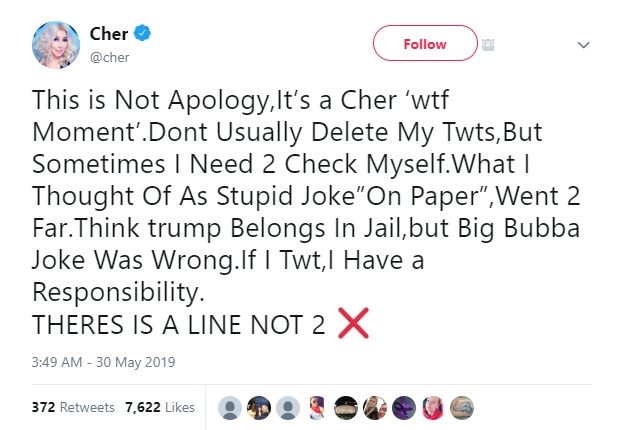 While removing that post, Cher has left several other messages online, including a tweet where she calls Trump a liar, a racist and an anti-Semite who actually is a “DICTATOR (IN-WAITING)“ and has “PULLED THE PLUG ON DEMOCRACY.”

The actress also asserted that Trump “BOUGHT” Attorney General William Barr, and she claimed the President is a criminal and a traitor who’s “UNFIT FOR OFFICE.”

Of course, this is far from the first time Cher has clashed with the well-known Republican. Back in 2012 after learning that Trump had business ties to the Macy’s department store chain, she posted she would never go to a company store again since he is a “LOUDMOUTH RACIST CRETIN, WHO’D LIE LIKE ‘HIS RUG’ TO GET SOME CHEAP PRESS.”

Then in June of 2016, she said in an interview that “when I watch Trump, I just want to blow my brains out.” Just before that year’s presidential election, the musician said during a Hillary Clinton fund-raiser that she would “leave the planet” if Trump won the White House, a promise she never tried to keep.