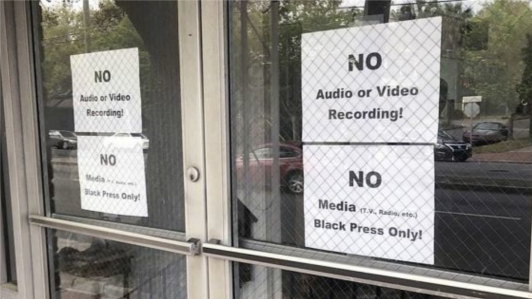 One of liberal Democrats’ favorite tactics these days is to smear anyone who doesn’t agree with them as a racist. However, they don’t always follow their own rules due to an apparent “do as I say, not as I do” mentality.

That philosophy was on full display in Savannah, Georgia, on Wednesday night, when reporters attempting to cover an event for candidates in the upcoming mayoral election were greeted with signs that said “Black Press Only.”

According to an article by Amanda Prestigiacomo, a writer with the Daily Wire, attendance at the Bolton Street Baptist Church was even more restricted than that, as other signs stated that “No Audio or Video Recording!” would be allowed.

Prestigiacomo then quoted the Savannah Morning News for noting that the event was coordinated by Rev. Clarence Teddy Williams, owner of the Trigon Group consulting group, "to garner support for just one black candidate in Savannah’s mayoral election."

While several black reporters and public officials attended the gathering, none of them would state they agreed with the overtly racist policy demonstrated there:

Former Savannah Mayor Edna Jackson “declined to comment,” said the paper, as did Chatham County Commissioner Chester Ellis, who weakly deflected by telling the press that the policy was “not my idea.”

In addition, Alderman Van Johnson, one of three blacks who have stated their intention to run for mayor, stated "that he believed people have the right to assemble and determine the rules of their assembly.”

Johnson noted that he “had talked about his vision for an inclusive and progressive Savannah” during the event.

“It’s not my meeting,” he stated. “I was asked to come and give a statement, so I came and I gave a statement.”

Prestigiacomo then quoted “failed 2015 mayoral candidate Louis Wilson, who is taking another shot at the political position this year” and also spoke at the meeting.

Not surprisingly, Wilson deflected from the controversial policy: “I didn’t plan the meeting, so I can’t comment on that part. I came to say what I had to say.”

Meanwhile, those who were able to attend the meeting were given a handout reporting the ethnic composition of Savannah’s population, as well as a vote breakdown for the 2015 election -- when incumbent Jackson was defeated in a run-off by current Mayor Eddie DeLoach.

An editorial by former Mayor Otis Johnson from the black-owned Savannah Herald entitled “United We Win, Divided We Lose” was also distributed at the gathering. “If we come together and decide what we want and who we believe will work best for us to get it, then we have a chance to advance,” Johnson urged the black community in the document.

That tone continued in another article about the event by Eric Curl -- a reporter for the Morning News – who described the situation in grim terms.“Race was front and center” at the event since “black reporters from at least two television stations were permitted inside,” Curl stated.

Savannah Alderman Estella Shabazz, who also attended, said that she had once owned a newspaper and was therefore a member of the black press, but she too declined to comment on the policy barring non-black people from going inside.

Of course, if this event had been arranged by a conservative Republican, and there were signs on the doors of “White Press Only” and “No Audio or Video Recording,” it would be virtually impossible to escape the scathing coverage across the country from virtually every outlet in the “mainstream media.”