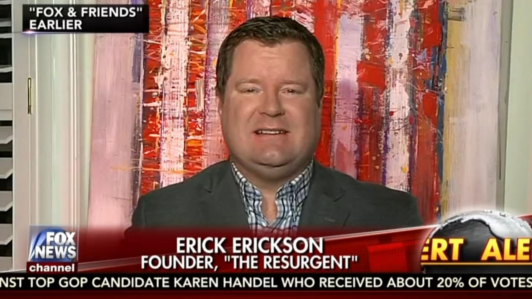 Hardly a day goes by without liberals in the “mainstream media” accusing the popular Fox News Channel of having a “unique relationship” with Donald Trump, the Republican occupant of the White House. Of course, those same people avoid or deny that a similar connection existed between former Democrat President Barack Obama and the CNN and MSNBC networks.

As a result, Erick Erickson -- a reporter who worked at FNC for five years -- has claimed that “the truth” about the channel and its liberal counterparts has more to do with ratings dominance than any pro-GOP bias.

Erickson posted an article on The Resurgent website entitled “The Truth About Fox News From Someone Who Worked There” on Thursday, when he noted that "there has been much hand-wringing in the non-Fox News press” about “the relationship between Fox, Fox employees and Trump.”

Fox News actually has a solid news department that does real news. The hype and rage of other news outlets focuses mostly on the opinion shows at Fox and conflates them to all the others.

The critics rarely talk about Shep Smith or Bret Baier. They only care about (Sean) Hannity, Laura (Ingraham) and Tucker (Carlson).

The main reason for the media’s hostility toward the prime-time programs is “not really because they are conservative opinion shows, but because they’re beating the other networks’ shows in the ratings,” Erickson wrote. “Just consider how much the press corps cheers when Rachel Maddow has a good night against Fox."

Erickson went even further when he stated: “What they really hate about Fox is that its quasi-alliance with Trump actually shows just how biased against the President the other networks can be.”

In addition, he pointed to the fact that “the immediate predecessor to this President had acolytes and cultists deeply embedded across news organizations, and many reporters from many outlets decided to go work for him before returning to the press.”

The analyst then listed several examples, including Jay Carney, who “was a reporter for Time magazine before joining the Obama White House,” former ABC News reporter and current CNN Newsroom co-host Jim Sciutto and former “green jobs czar” Van Jones, whom Erickson described as “an awesome guy, by the way.”

“The list goes on and on across networks,” he added before noting that various CNN employees “are married to people who worked for Obama operatives or Clinton operatives.”

Nevertheless, the conservative analyst -- who was a political contributor on CNN from March of 2010 until January of 2013 -- admitted that “I prefer CNN’s news coverage to all the other networks and find, when going on networks, that CNN has some of the very best and most competent people.”

“I think CNN has made a strategic mistake in some of their programming choices and could actually dominate Fox with some adjustments,” the reporter continued. “But not a week goes by that I don’t regret leaving that network for Fox.”

Erickson saved his sharpest barbs for MSNBC. “During the Obama era, you never heard as much outrage or had as much coverage of its routine fluffing of President Obama, even though it was egregious and flagrant.”

Yes, there is a pro-Trump bias at Fox News. I have seen it for myself. … But the rest of the media never says jack about MSNBC’s partisan biases not because it does not have them, but because MSNBC does not have the ratings Fox News has.

The media so obsessed with what Fox is and is not covering and how Fox interacts with this White House has very valid points. But they hypocritically and willfully ignore their own left-leaning biases, affiliations and intermarriages.

“And that ultimately is the problem,” the reporter continued. “There are so many valid criticisms to be made about Fox. But many of the same criticisms apply to the very networks raising the criticism, and they get all defensive when you point it out.”