Rick Santorum: I Love Being a ‘Responsible,’ ‘Lone Voice’ on CNN 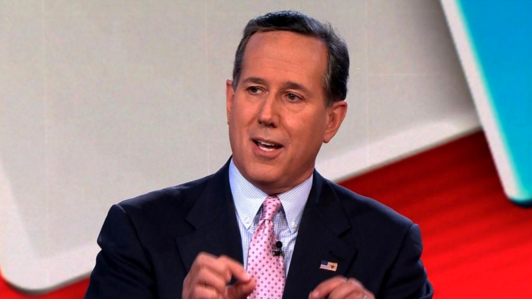 It certainly comes as no surprise that anyone watching CNN can always count the number of conservative Republican commentators on the fingers of one hand.

However, Rick Santorum – who was formerly a two-term senator and GOP presidential candidate -- states that “I love it” at the liberal channel because “I can say whatever I want to say and however I want to say it” even though he often must play the role of a "responsible" and “lone voice” from “the other side” of the political aisle.

According to an article posted by Jeremy Barr, a reporter on media and politics for The Hollywood Reporter website, Santorum doesn’t mind being outnumbered:

Do you really need to hear seven people say the same thing, or versions of the same thing without anybody pushing back? ... No, I don't have a problem with that at all.

He added: “I get a chance to go on that network, as sometimes a lone voice, but have a chance to make the case and say what I want to say” during the “no holds barred” discussion among “very good folks to work with.”

Barr also noted that Santorum “knows that many of CNN's more left-leaning viewers aren't with him” and haven’t been since he became a senior political correspondent in January of 2017.

“I do understand that it's an audience that by and large doesn't agree with the positions that I'm taking,” the Republican stated, “and so it's really important to try to do it in a way that's respectful and that people will be willing to listen.”

He continued: "I don't want to get them any reason to turn me off. I want them to hear the alternative."

The reporter indicated that Santorum is not always popular on the CNN set.

As an example, Barr cited a nine-person panel on Wednesday evening, when chief legal analyst Jeffrey Toobin “wasn’t buying what Santorum was selling in defense of President Donald Trump, who was torched earlier in the day by congressional witness Michael Cohen.”

“Is that really the best defense you can come up with?” Toobin asked, drawing laughter from the rest of the panel.

In addition, the reporter claimed that “Santorum has been a lightning rod for criticism, attracting the ire of the Internet -- not to mention his fellow panelists -- for his commentary on a range of topics.”

One such backlash took place on November 25, when the conservative commentator asserted that scientists supporting climate change “are driven by the money they receive."

“Not surprisingly,” Barr noted, “his Twitter mentions that day were a mess.”

The conservative stated that he gets a much different reaction from viewers he meets in real life.

“They all are very appreciative” even though most of them “do not share my point of view,” Santorum noted. As a result, he believes “the vast majority of the CNN audience wants to hear a responsible voice on the other side."

However, Barr also noted the commentator “found a more sympathetic audience at the Conservative Political Action Conference on Thursday, when attendees expressed their sympathy and support for him, particularly when he's put up against a large panel of left-leaning commentators and hosts.”

"It makes me crazy," a conservative radio host told him at CPAC.