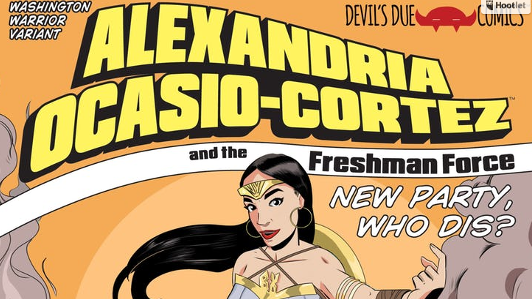 Look! Up in the sky! It’s a bird! It’s a plane! It’s … Alexandria Ocasio-Cortez?

Yes, the Socialist Representative from New York will continue to make a big impression on pop culture in May, when she and the rest of the Democrat “Freshman Force” will take on villainous Republicans in a one-shot comic from the Devil’s Due publishing company.

According to its website, the project’s bizarre title is “New Party, Who Dis?” and will have two different covers featuring Ocasio-Cortez standing over an unconscious red GOP elephant with a nervous blue Democrat donkey and the U.S. Capitol in the background.

The main cover will feature AOC in a white pantsuit (which she wore during the State of the Union address on February 5) holding a smart phone in her right hand, representing her 3.2 million Twitter followers.

However, the “Washington Warrior Collector Variant” shows her in a Wonder Woman-style suit of armor holding a sword over the elephant, which is then wearing a crown and a royal purple robe.

“Comic creators converge to celebrate the election of the most diverse group of freshman congresspersons in history,” the site adds, and the title will “spare no one in this satire that takes aim at Washington.”

In an article on CNN’s website, Josh Blaylock, the comic’s creator, stated: “There's just something about Alexandria that resonates with so many people.”

Blaylock also noted that the title will be “a collection of stories that all embrace the theme that we're excited about all of the energy and positive change” coming from the freshmen in Congress.

The anthology, he added, will span all genres while portraying the “sassy” superhero. “Some of the stories are really sweet; some are completely absurd and satirical; some are cathartic and venting.”

Of course, digital reporters Michelle Lou and Brandon Griggs sang the praises of Ocasio-Cortez, who at 29 years old “is the youngest woman ever elected to Congress and has become an unofficial leader of the newest class of House Democrats.”

She “has become something of a celebrity -- and a target of criticism from some Republicans -- for her meteoric rise and outspoken style,” Lou and Griggs added.

Meanwhile, Sam Stone of the CBR.com website – which stands for “Comic Book Resources” – also had positive things to say about the freshman socialist and her one-shot comic.

“In office for less than two months,” Stone stated, Ocasio-Cortez “is already making her presence felt throughout Washington, D.C.”

"It’s no secret that AOC has become the unofficial leader of the new school,” Blaylock told him, “and has sparked life back into Washington, and that’s reflected in the enthusiasm on display by the men and women contributing to this project.”

“While we all don’t agree on everything, we share a common excitement for the breath of fresh air the new Congress brings,” he continued.

As a result, the special edition will feature “an all-star lineup of creators” of children’s tales, including Jill Thompson of the Scary Godmother books and Jose Garibaldi, the visual development artist for Captain Underpants and The LEGO Movie 2.

“A portion of the proceeds will go to support the USO and RaicesTexas.org, a nonprofit organization committed to providing legal services to immigrant families and refugees,” Stone concluded.

Even though the freshman Congresswoman has not commented on this project, she has hinted that she does indeed read comics. In January, she responded to a Politico story that claimed Democratic leaders were trying to "rein in" Ocasio-Cortez over her proposed Green New Deal.

Interestingly enough, this isn’t the first time Devil’s Due has combined politics and comic books. In 2009, Blaylock learned that the 44th President was a fan of Conan the Barbarian and produced a limited series entitled Barack the Barbarian, which lasted four issues.