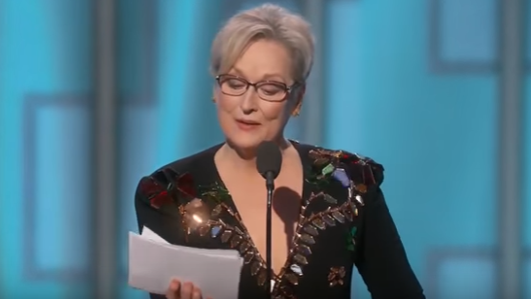 The longer Donald Trump remains the occupant of the White House, the more difficult it becomes for virtually anyone in entertainment to discuss the GOP official without spewing enormous amounts of venom. A recent example of this came on Saturday, when long-time actress Meryl Streep told CBS Late Show host (and frequent Trump basher) Stephen Colbert during a fund-raising event in New Jersey that “I’m scared” of the President. "By his possibility."

According to an article by Addie Morfoot in Variety, Colbert didn’t even wait for his guest to come out on stage before taking potshots at the Republican President. He introduced her: “She has been called the greatest living actor of our generation, but I think perhaps the greatest honor she has ever been given was when she was called (in Trump’s voice): ‘One of the most overrated actresses in Hollywood.’”

Of course, the President was then the first item discussed during the Montclair Film Festival’s annual An Evening With Stephen Colbert fund-raiser held at Newark’s Performing Arts Center.

“I’m scared by” Trump, the actress -- who has been nominated 21 times for an Academy Award -- stated in front of an audience of 2,800 people. She then sympathized with Trump for the apparently inevitable prosecutions:

I empathize with him. I can’t imagine what his 3 a.m. is like.There is a gathering storm. Everybody feels it. He feels it. His children are in jeopardy, and I feel that. I think: 'What if my children were in jeopardy? I would do anything. Anything! To get them out of trouble,' so we should be afraid.

Morfoot also noted that “Colbert, a Montclair resident, has long been a booster” of the event, since his wife Evelyn is "board president of the festival, which is heading into its eighth year in May.” The annual benefit has featured Colbert with late-night liberal buddies like Jon Stewart, John Oliver, Jimmy Fallon, and Samantha Bee.

“This is one of my favorite nights of the year,” Colbert said. “When my wife said to me: ‘Do you think we can get Meryl Streep here this year?’ I said: ‘No, I can’t get Meryl Streep!’"

“And then I emailed Meryl,” he noted. “Ten minutes later (she wrote back) that she ‘would love to come back to New Jersey!’”

Streep discussed several other topics during the interview.

While discussing her early career, the actress said that she never dreamed of being a movie star because “my nose was too big.” Colbert jumped to Bradley Cooper’s recent movie A Star is Born.

“You could’ve played that part!” Colbert groveled while referring to Lady Gaga’s role in the film. “Oh honey, no,” Streep replied. “No way … nobody but Gaga!”

Streep also humble-bragged that “The greatest gift in my career was not being cast as a bombshell early in my career — even though I was one — because I could be a character actor.”

As NewsBusters previously reported, this is far from the first time Streep’s far-left philosophy has openly been on display.

In January of 2017, the actress vented about politics and called Hollywood and the mainstream media “the most vilified segments in American society right now” while lauding Hollywood’s impressive cultural diversity.

Of course, Streep’s biggest recent contribution to liberal politics was when she starred as Washington Post publisher Katharine Graham in the The Post, a film that dramatized the Washington Post’s 1971 decision to fight Nixon and publish the Pentagon Papers.

During a fawning interview with NBC's Savannah Guthrie, Streep hailed director Steven Spielberg for seizing on the project when “we’re seeing that our press is under siege."

"And just even the notion of what the truth is and how much we really do depend on the First Amendment and the freedom and independence of the press," she added.

It’s unlikely that the liberal actress and activist will back away from her constant criticism of the President anytime soon, so she can still look forward to at least two more years of slamming the Republican occupant of the White House.