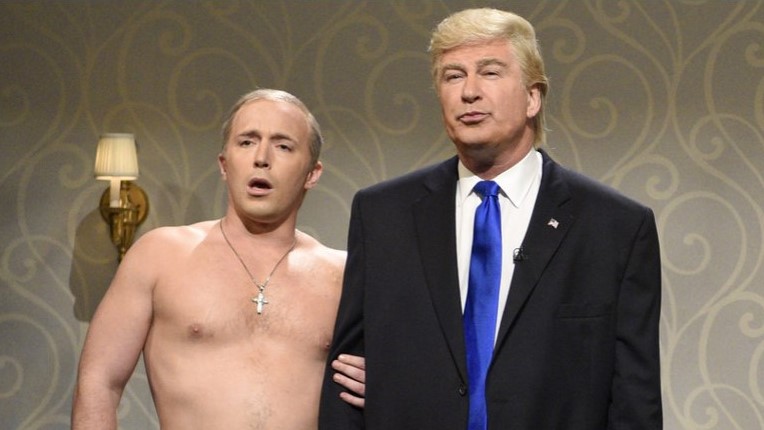 Poor Alec Baldwin. The liberal actor and activist is trapped in a role that won’t let him go. Every time he decides he’s had enough of imitating President Trump on NBC’s Saturday Night Live program, people tell him he must continue because “we need you.”

Baldwin, who won an Emmy Award for his impersonation, now claims at least one other benefit from his ongoing role: “Ever since I played Trump, black people love me. They love me. Everywhere I go, black people go crazy.”

The longtime actor made those admissions during an interview by Lacy Rose, the TV editor with The Hollywood Reporter website, who began her article by stating:

With a new ABC talk show and his return to Saturday Night Live, the unfiltered star is mobilizing against the GOP (“anything you equate with leadership, they don’t have it”) … and revealing mixed emotions on the #MeToo movement: "People write: ‘You're next, aren't you?’”

Turning to his recurring role on Saturday evenings, he noted: The Republican president is “cartoonish. All I wanted my Trump to be is mean-spirited and miserable, like Mr. Potter from It's a Wonderful Life.”

“But then I'll say, ‘Oh, I don't want to do it anymore,' and people will go: 'Don't you dare give that up, we need you.' Like I've gotten people through something in our nation's history."

“I think it's because they're most afraid of Trump,” he continued. “I'm not going to paint every African-American person with the same brush, but a significant number of them are sitting there going: 'This is going to be bad for black folks.'”

Later, as they left the restaurant where the interview began, a young man shouted: “Duuuude, you do that Donald Trump thing real good. Real good.”

“The man introduces himself as Tyrone,” Rose noted, “and though he's waving and pointing and causing something of a scene, the often-irritable Baldwin doesn't mind a bit.”

“In fact, he calls Tyrone over, and the two begin cracking each other up,” she added. “It's hard to tell who's enjoying the other more.”

The editor then stated:

Ever since he unveiled his take on Trump ahead of the 2016 election, Baldwin gets this kind of response “incessantly,” he says.

It's more than just people's excitement at encountering a celebrity -- like Tyrone, they want to express genuine gratitude.

“And it's wild because it's just this dopey thing I do that took off,” the liberal actor added.

But as NewsBusters reported last March, Baldwin then claimed: “Every time I do [a Trump impression] now, it's like agony. Agony.”

“If things don't go in the right direction for the midterms,” he stated, “I could go out on the street, stand on any corner and tap 10 people on the shoulder. And all 10 of them, in all likelihood, would be more qualified -- ethically, morally, intellectually and spiritually -- than Trump.”

The president responded by tweeting:

Alec Baldwin, whose dying mediocre career was saved by his terrible impersonation of me on SNL, now says playing me was agony.

Alec, it was agony for those who were forced to watch. Bring back Darrell Hammond, funnier and a far greater talent!

Then in July, the Trump impersonator told shock jock Howard Stern that if he ran against the president in 2020, “I would win. I would absolutely win. I would 1,000 percent win” before saying that it would be “the funniest, more exciting, most crazy campaign.” By July, he'd ponied up $16,000 in support of another celebrity candidate, Cynthia Nixon, who ran and lost New York's Democratic to incumbent Gov. Andrew Cuomo. "I did it to float her name out there for the next thing," Baldwin said. "I want her to run for mayor after [Bill] de Blasio terms out."

For the moment, the comedian is consumed with producing Sundays with Alec Baldwin on ABC. The 10 p.m. program will feature “one-on-one conversations with interesting people from American pop culture.”

Apparently the comedian is hoping that some of those “black people who love me” will tune in so this show fares better than Up Late With Alec Baldwin, an MSNBC program that was canceled in 2013 after just five episodes.