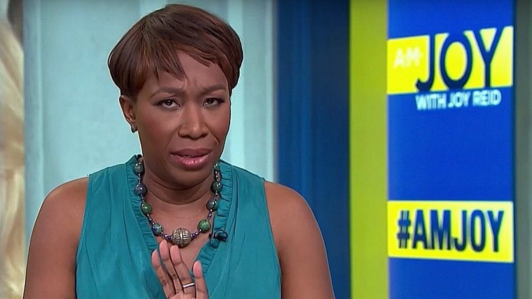 MSNBC host Joy Reid has learned the hard way what can happen when a person is in too much of a hurry to spread allegations about someone else before checking if those accusations are true.

Roslyn La Liberte, a California woman who Reid claimed shouted racial slurs at a Latino teen during a heated public meeting on immigration in June, filed a defamation suit against Reid in federal court in New York on Tuesday.

According to an article by Mediaite's Aidan McLaughlin, the filing accuses Reid of “spreading the false claim on social media that she lobbed a racial slur at a 14-year-old boy.”

McLaughlin also noted that the viral photo used by Reid shows her wearing a MAGA (Make America Great Again) hat and “apparently screaming in the direction of a young boy” while shouting: “You are going to be the first deported, … dirty Mexican!”

He showed up to rally to defend immigrants. … He is 14 years old. She is an adult.

Make the picture black and white and it could be the 1950s and the desegregation of a school. Hate is real, y’all. It hasn’t even really gone away.

However, La Liberte has stated that her conversation with Joseph Luevanos was “civil” and ended with them hugging each other.

Nevertheless, the lawsuit asserts: “Reid used her substantial social media presence, fame and reputation as a hard-hitting journalist to publish to her many followers” that the plaintiff “screamed abhorrent racial slurs“ at the boy.

La Liberte also stated that the liberal TV host “posted that she hurled racial slurs at the boy on her Twitter, Instagram and Facebook pages, where the MSNBC star’s following totals 1.5 million.”

Reid eventually deleted the posts and apologized: "It appears I got this wrong. My apologies to Mrs. La Liberte and Joseph."

NewsBusters previously reported that Reid “wrongly brought down Twitter rage on a woman who never yelled awful things at a Latino boy.”

In addition, an article posted by the local Fox affiliate stated:

A photo taken by the Ventura County Star that's been making the social media rounds has become twisted as it churns its way through the Internet.

Activists have been spinning it in different directions. In the photo she LOOKS like she's verbally attacking a 14-year-old boy.

In fact, La Liberte stated: “I’m not an evil person. I’m a mother of five...a grandma of four....I never said anything disparaging. I never did.”

The article also noted: “During a recess in the meeting, the teenager says he started a conversation with the woman to try and understand her feelings.”

“Both he and his mom say there were rude people saying ugly things,” the report added. “For the record, he was born and raised in this part of Southern California, and he didn’t like that. But, he says, what you see in the photo isn’t a confrontation but a conversation.”

“Unsurprisingly,” the article continued, “enraged leftists started harassing her, and her business suffered....She says the picture coupled with the spread of social media has been incredibly damaging.”

La Liberte also noted: “I look like a monster. If I saw that, I would be upset.”

This incident is yet another example why people in the “mainstream media” should be careful when reporting on conservatives, especially when dealing with incidents tinged with potential racism.