During the ongoing fallout over Omarosa Manigault Newman’s attention-seeking book tour, Georgetown University professor Michael Eric Dyson slammed the President for calling the author a “dog” in a tweet and went so far as to accuse Trump of using “KKK language” in his attacks.

Tuesday afternoon on CNN, Dyson accused Trump of “evoking an entire history of assault against black people with dehumanizing language” while responding to the claims made by the author of Unhinged: An Insider’s Account of the Trump White House.

Meanwhile, Jerry Dunleavy pointed out that Trump has used that term before when describing many people, several of whom were not black.

As for Dyson's claims, he asserted that Omarosa was giving Trump “a taste of his own medicine, a dose of what he’s done” when expressing “the kind of vicious animus he’s expressed toward people of color,” including using such terms as “dog” and “mongrel.”

Don’t just have the complicity of silence or “Oh, my God,” and wring our hands. This is an assault the likes of which we haven’t seen from the presidency in so many decades.

The liberal activist then stated that many African-Americans make the mistake of saying: “Oh, well. He treated me nicely,” or “Oh, he did this nicely.”

Instead, Dyson noted that “having affection for black people…has nothing to do with the decrying of the hatred that someone might express about black people in general.” 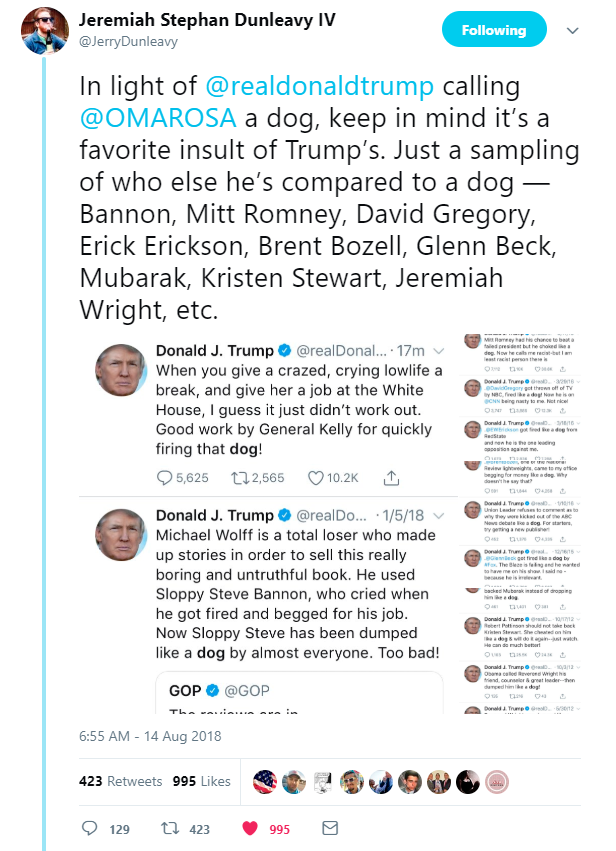 Dunleavy then offered proof of his claim, including several tweets that Trump has posted over the past few years.

In a recent message, Trump referred to the former aide by noting:

When you give a crazed low-life a break and give her a job at the White House, I guess it just didn’t work out. Good work by General Kelly for quickly firing that dog!

Back on January 5, the President responded to attacks from reporter Michael Wolff by calling him “a total loser who made up stories in order to sell this really boring and untruthful book.”

“He used Sloppy Steve Bannon, who cried when he got fired and begged for his job,” Trump added. “Now Sloppy Steve has been dumped like a dog by almost everyone. Too bad!”

On June 11 of 2016, the president turned his attention to former presidential candidate Mitt Romney, who “had his chance to beat a failed president” – Democratic incumbent Barack Obama -- “but he choked like a dog. Now he calls me racist -- but I am{the] least racist person there is.”

Before that, Trump referred to outgoing Meet the Press host David Gregory as having been “thrown off of TV by NBC, fired like a dog! Now he is on CNN being nasty to me. Not nice!”

Of course, this isn’t the first time people in the “mainstream media” have promoted books criticizing the Trump administration, but Dyson’s racist claims have given CNN yet another chance for the low-rated cable news network to use in trying to attract a few more viewers.