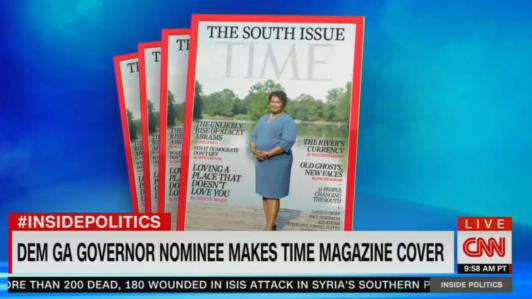 So you say you’re weary of all that press coverage for Alexandria Ocasio-Cortez, the New York Democrat who defeated heavily favored incumbent Representative Joe Crowley in the party’s primary last month and is still trying to explain what a “Democratic socialist” does?

If so, Time magazine has got the candidate just for you! And if she’s victorious on Election Day, she will become a hard-left governor of the state of Georgia.

In order to get the scoop on Stacey Abrams, the magazine dispatched Molly Ball, national political correspondent for Time and CNN, to cover the primary last month.

The result was that Ball wrote a gushy piece that showered the Democrat with praise for her status as the “underdog” in the conservative state. She only used the word “abortion” once for the candidate who referred to herself  as not a liberal but a “pragmatist” instead.

“I know talent when I see it,” Valerie Jarrett, a former top adviser to Barack Obama who tells me she sees the same kind of “unusual” skills in Abrams.

I see somebody who campaigns authentically, has character and integrity, is resilient and graceful, and who is able to take the long view and ignore a lot of noise.

Nevertheless, Ball stated that the candidate “holds liberal positions on social issues, but she considers herself a pragmatist. She likes to boast that she was once given a Friend of Labor award and an ‘A’ rating from the Georgia Chamber of Commerce in the same year.”

“Still, some of her proudest achievements aren’t bills she passed but Republican efforts she stopped.”

The script of how you run for office has been determined for eons by white men telling everybody else what to do, and Stacey Abrams said: “No, thank you.”

Her campaign isn’t just a playbook, it’s an act of imagination. And so, like any unprecedented effort, there’s a good chance it could fail.

Ball made an interesting point when she stated: “People tend to remember the first time they heard Stacey Abrams speak, and it's easy to see why.”

The correspondent also noted that the candidate has a wide variety of interests. ”She's as likely to geek out about tax policy or Star Trek as she is to summon the spirit of justice.”

“In a Democratic Party divided and desperate for fresh faces, Abrams is already becoming a national star,” Ball stated.

“But in a state that hasn't elected a Democratic governor in two decades, Abrams remains an underdog.”

“There's no question the state is becoming more diverse, but that doesn't mean a conservative state has all of a sudden become liberal," said Whit Ayres, a Washington-based Republican pollster who has worked extensively in Georgia. “All of Abrams' charisma, money and momentum won't matter if the political math doesn't add up.”

On the other hand, if she can pull it off, the implications would be profound, not just for Georgia but for the whole region and potentially the nation. “Ever since Bill Clinton won re-election in 1996 with a strategy of triangulation, Democrats have tried to win in Republican territory by appealing to white centrist voters,” Ball noted.

Although Abrams' central priorities are budget-focused, she's to the left of most Georgia voters on polarizing issues like gun rights, Confederate monuments and kneeling NFL players.

“But she has an underrated ability to connect with rural and working-class whites along class lines.” Ball noted.

“Her campaign signs are popping up in affluent white suburban neighborhoods, and some early polling has shown her ahead of her political opponents,” she added.