Earlier this week, our friends at CRTV channel found a unique way to cover the midterm contests by creating a satirical video made (using clips from a real, PBS interview) to appear like conservative personality Allie Stuckey had interviewed well-known socialist Democratic House candidate Alexandria Ocasio-Cortez.

After watching the interview several times, Stuckey and CRTV found responses they could use and recorded new questions being asked and once they had the person asking several inquiries, it didn’t take long to edit the entire sequence into one brief video. Pretty simple, right?

For those on the left, however, it seems like they showed that, once again, satire is only acceptable if you're a leftist or someone attacking conservatives. Perhaps it was a little too much for their brains. Oh well.

The satiric video was posted online on Monday, and by 24 hours later, the site had drawn more than one million readers to its Facebook page.

The pathetic outrage machine cranked up on Tuesday when Ocasio-Cortez quoted tweeted thoughts from a befuddled Shane Goldmacher of The New York Times who, like Ocasio-Cortez, didn’t seem to get that it was a joke: “Republicans are so scared of me that they’re faking videos and presenting them as real on Facebook because they can’t deal with reality anymore. Here’s one bonafide truth: Election Day is November 6th.”

Ah, yes. The liberal headaches are quite something, isn’t it? 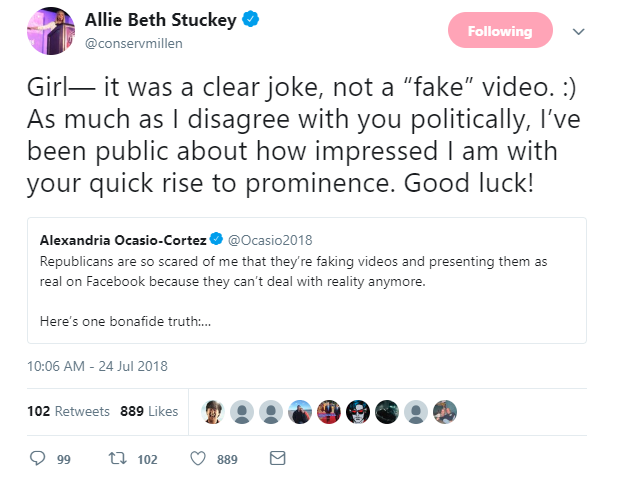 For any leftist who didn’t know Stuckey’s schtick, one only had to visit her website where she wrote that she creates “both satire and straightforward explanations to warn my fellow millennials about the dangers of liberal indoctrination and emphasize the commonsense of conservatism.”

Notice the word “both satire and straightforward.” Guess that was too much for the liberal media’s new superhero who will fix the world’s problems from a New York congressional seat.

Conservative Review’s Chris Pandolfo, Daily Wire’s James Barrett and Kassy Dillon, Hot Air’s John Sexton, Townhall’s Matt Vespa, and Twitchy (here, here, and here) were a few of our pals who had a swell time poking fun at the left’s lunacy as outlets like The Verge, Vox, the U.K.’s The Independent, The Washington Post, and The Wrap threw hissy fits over the video supposedly being deceptive.

One has to think that many of those who were outraged at Stuckey think what Sacha Baron Cohen is doing with Showtime is the bee’s knees.

Stuckey appeared on Wednesday’s Tucker Carlson Tonight to explain herself, explaining to those still uninformed (click “expand” to read more):

Of course, it was intended to be seen as a joke. Satire has played a very important part of political dialogue for a long time, and I’m certainly not apologetic for playing a part in that. And this particular tactic that we use, we certainly didn’t come up with it ourselves. We have seen comedians since the 1970s and 1980s doing similar things. It was never meant to actually be deceived, but it was supposed to be very obvious that it was satire. And for the vast majority of people, Tucker, this was obvious. Most people got and appreciated the joke. But, of course, you see the manufactured outrage from people on the left who believe that humor is exclusive to the hilarious people on late-night shows and comedic geniuses like Michelle Wolf and Samantha Bee. Apparently, conservatives are not allowed to tell jokes no matter what. So, that’s what I learned this week.

Referring to Democrats and “especially...socialists,” Stuckey concluded that “we already know that they lack a basic understanding about economics and geopolitics” so “[i]t's not that surprising that they also lack an understanding of humor.”