Mayor Bill de Blasio: ‘I Will Not Shed a Tear’ if NY Post Goes Under

Bill de Blasio, the wildly liberal mayor of New York City, stated during an interview on public radio station WNYC’s The Brian Lehrer Show that he would have no problem with the conservative New York Post going out of business. In fact, he noted, “I will not shed a tear” if the newspaper goes under.

Lehrer began the discussion by referring to an email the mayor had sent out, in which he asserted that "market forces in the newspaper industry” might lead the company to go out of business as “wishful thinking.”

“Maybe that was just a joke,” the radio host continued, “but would you really like to see the main opposition paper in the city go under?” 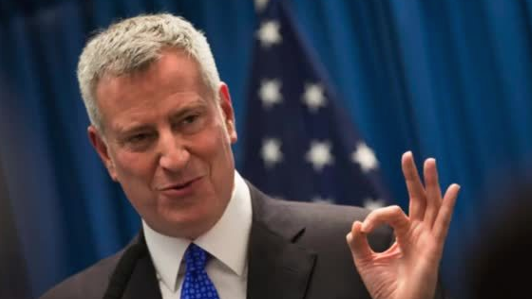 “I’ll tell you what I feel,” de Blasio responded. “I believe the Post is not only right-wing, not only distorts the facts on a regular basis, but is divisive.”

In fact, the mayor added, he’s “shocked” that more people in the city don’t agree with him on this subject.

“It used to be a commonplace thing to talk about not so many years ago in New York City,” he continued. “Just look at the headlines every day and look at the dog whistling that goes on in the New York Post all the time.”

“No,” de Blasio added, “I will not shed a tear if that newspaper is no longer here because I think we need a better civic discourse.”

“There’s more and more media than ever,” he stated, “and that’s a good thing.”

The mayor then asserted that many outlets are doing good reporting. He then stressed that, in his opinion, the Post wasn’t one of them.

“Come on, the Post is not like everybody else,” the mayor then concluded. “I think we should just stop the charade. Their presence in our society unfortunately is harmful.”

The exchange came after a New York Post article was posted on Thursday by reporters Yoav Gonen, Max Jaeger and Bruce Golding that claimed the mayor has an “obsession with his media image.”

One’s a dyed-in-wool progressive who runs his own sanctuary city. The other’s an America-First protectionist.

But it turns out Mayor Bill de Blasio and President Trump share a common enemy -- the news media.

“Thousands of emails City Hall released Thursday under court order show Hizzoner sounding positively Trumpian as he attacks a report noting how he hit the gym instead of heading to the scene of a standoff between cops and a crazed gunman who shot a firefighter on Staten Island,” the reporters noted.

“And predictably,” the article noted, “the emails reveal de Blasio wishing ill on his least favorite news outlet – the Post – as he speculated about the potential impact of the rival Daily News cutting back on its print editions and shifting operations online.”

It’s always refreshing when liberals join conservatives in having an adversarial relationship with those in the press. Of course, the Democrats often hope their enemies go under while Republicans don’t take such a hostile view of their adversaries.