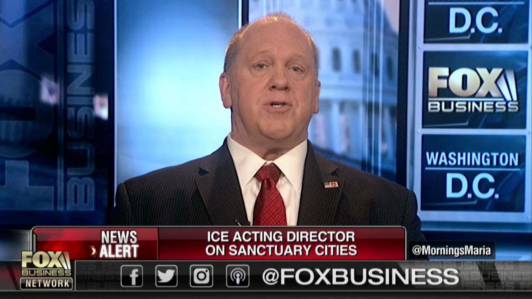 The ongoing struggle between Democrats and Republicans over illegal immigration took a major turn on Monday, when Thomas Homan -- acting director of the U.S. Immigration and Customs Enforcement agency -- sharply criticized House Minority Leader Nancy Pelosi for drawing a bright line against the federal lawsuit alleging California is nullifying federal law enforcement on immigration. She said "We will fight this sham lawsuit and will fight all cowardly attacks on our immigrant communities.”

On national TV, nobody but Fox picked up on this remark. During an interview on the March 12 edition of the Varney and Co. program on the Fox Business Network, Homan also slammed the House minority leader for asserting that the agents are “terrorizing immigrant communities.” The acting director stated (video is here):

You’re talking about law enforcement officers, men and women who put their lives on the line for this country every day. They strap a gun to their hip and leave the safety of their homes to defend this nation, so how dare you call them cowardly!

Homan also asserted that the agents are not terrorizing immigrant communities when he noted: “The people we arrested during these California operations” are accused of a wide range of crimes, including “lewd and lascivious acts with juveniles, assault with deadly weapons, murder...ICE went in there and removed these people from those communities. That’s far from terrorizing. We’re protecting people, we’re protecting the American public.”

Homan also addressed the apology made by San Francisco Sheriff Vicki Hennessy after ICE agents were able to interview an inmate in a city jail earlier this month, the acting director called that situation “just incredible” and “just ridiculous.”

"Think about it,” he stated. “You’ve got a law enforcement leader apologizing for giving a federal law enforcement officer ... access to someone who’s in the country illegally and was arrested for committing yet another crime.”

In her apology, the sheriff noted: “My staff made a mistake, and I have to hold myself accountable. I apologize on behalf of the department. I feel embarrassed by it. I’ve taken steps to make sure it never happens again.”

Hennessy also claimed that ICE was "testing our defenses, and they found some weak points.”

During the interview, host Stuart Varney referred to President Donald Trump's current trip to California for the first time since being elected to the White House in the 2016 election as entering the “belly of the beast,” and Homan agreed with that description.

Varney then asked: “Are you still being blocked?"

“Absolutely,” Homan replied. "If you watch, the governor [California Democrat Jerry Brown] gave a press conference last week. He called the administration liars because we do have access to the jails. I do think the San Francisco sheriff just answered that question, the way she apologized that we actually got access to a jail on one occasion."

“And we’ve got to remember,” he continued, “the California Sheriffs Association, the governor’s own sheriffs, came out with a press release saying they were against these laws and they are releasing these public safety threats to the streets, so they’re equally upset as ICE is.”

Also on Monday, California Lieutenant Governor Gavin Newsom slammed President Trump’s trip to that state in a Twitter post and video. Trump “has finally worked up the nerve to come to CA and visit his precious wall -- a 1,900-mile monument to idiocy that is literally IMPOSSIBLE to complete.”

“We cannot let this small, scared bully hurt our economy and turn ICE into his own personal army of hate” because “Trump is using ICE to tear apart families," Newsom added.

A Nexis search of broadcast and cable news programs shows no one noticed the "personal army of hate" attacks.

According to an article written by Marilyn Iceman of USA Today, “Newsom's name has been thrown around as a possible Democratic contender for the 2020 presidential election, but he told KQED earlier this month that he's not running.”

Judging from the way the 2020 presidential race is shaping up, he might just be the only Democrat to stay out of the race.