Some people sure can hold a grudge. One of those is Rosie O'Donnell, a former co-host on ABC's The View weekday program who's been in a feud with Donald Trump ever since they began sparring more than a decade ago.

In the latest clash between the liberal comedian and the current occupant of the White House, O'Donnell will take part in a “Resistance Address” slated to take place in Washington's Lafayette Park on Tuesday just hours before Trump gives his first address to the members of Congress. 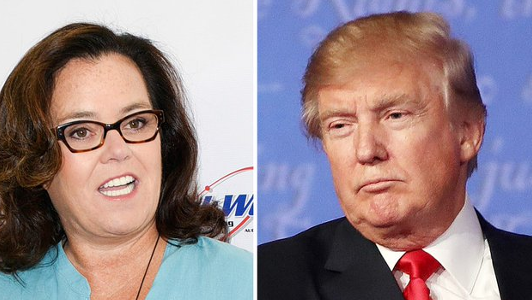 According to an article posted on The Hill website by Judy Kurtz: “The Broadway vet and former daytime talk show host will be among the 'thousands' organizers expect to attend the event.”

The effort is aimed at “sending a clear message outside of Trump’s front door that his agenda does not represent the values of the American people,” a news release stated.

In addition, the statement noted:

The rally will feature speakers from diverse organizations and groups of people who have been impacted and harmed by the Trump administration’s policies, including women, people of color and members of the LGBTQ (Lesbian, Gay, Bisexual, Transgender and Queer) community, as well as environmental and immigrants' rights groups.

O'Donnell and other liberals will be joined at the rally “by such organizations as the American Civil Liberties Union, MoveOn.org, Food & Water Watch, National Nurses United and Our Revolution, among others,” Kurtz noted.

David Bixenspan stated in an article on the Mediaite.com website:

O’Donnell and Trump have feuded publicly since December of 2006. Trump had been making the media rounds as a result of controversies over the past of then-reigning Miss USA Tara Conner at a time when he owned and was heavily involved with the beauty pageant.

O’Donnell took issue with some of his comments, comparing him to a “snake-oil salesman on Little House on the Prairie” as opposed to the self-made man he claims to be, as well as repeating the claim that he had filed for bankruptcy in the past (his businesses had on six occasions).

“Trump soon responded with a threat of a lawsuit in a People magazine interview, one he never followed up on in court,” Bixenspan noted.

“You can’t make false statements,” Trump asserted. “Rosie will rue the words she said. … I’ll most likely sue her for making those false statements -- and it’ll be fun. Rosie’s a loser. A real loser. I look forward to taking lots of money from my nice fat little Rosie.”

It kept going from there, with Trump tweeting this in 2011 when O’Donnell got engaged:

I feel sorry for Rosie 's new partner in love whose parents are devastated at the thought of their daughter being with Rosie -- a true loser.

O’Donnell and Trump “have been engaged in a longtime, ongoing war of words,” Kurtz said in agreement.

“Trump, 70, once called the 54-year-old comedian a 'pig,' saying during a presidential debate last year that O’Donnell 'deserved' his verbal attacks,” claimed The Hill reporter. “O’Donnell has dubbed Trump 'mentally unstable' and has accused him of 'treason.'”

As NewsBusters previously reported, O'Donnell has used her time as a co-host on The View and other appearances to espouse her extremely liberal views.

In September of 2004, she claimed that penalizing a Muslim National Football League player for praying after a touchdown is the kind of thing that "propels us to war." A month later, O'Donnell gushed over Jimmy Carter, calling the one-term commander-in-chief “my favorite president ever."

Later that month, the comedian used a terror attack in Canada as a platform to push for stricter gun control, and soon after hammered the Fox News Channel, “which I think just likes to incite a lot of hate and is not always factually correct."

It wasn't long before O'Donnell again left The View (in part because the program's founder, Barbara Walters, didn't want her back on the show) and split with her second “wife” -- Michelle Rounds – in order to "focus on her children."

In the following August, angry Hardball host Chris Matthews fumed over O'Donnell being the object of laughter during the Republican debate the night before. Rather than allow that conservatives might object to the liberal comedian's trashing of conservatives, Matthews saw Republican voters as full of hate.

When ABC decided to revive The Match Game, O'Donnell took advantage of being a celebrity guest to bash Trump as “an orange slug,” and Trump hadn't yet moved into the White House before she claimed America had “less than three weeks” to “stop” the Republican president from being inaugurated.

Given O'Donnell's long verbal feud with Trump, it won't be a question of whether she will slam the president on Tuesday, but instead how much and how harshly.