In an obvious back-handed compliment, Rachel Maddow started her eponymous Tuesday night program on MSNBC by supposedly praising the Cable News Network, which she said “once upon a time” was the “only cable news network, and they really did have a singular role in keeping people informed.”

However, while the network once had a reputation for providing information “about what was going on, not only around the country, but around the world” in the 1990s, she claimed “CNN today is not what it used to be.” 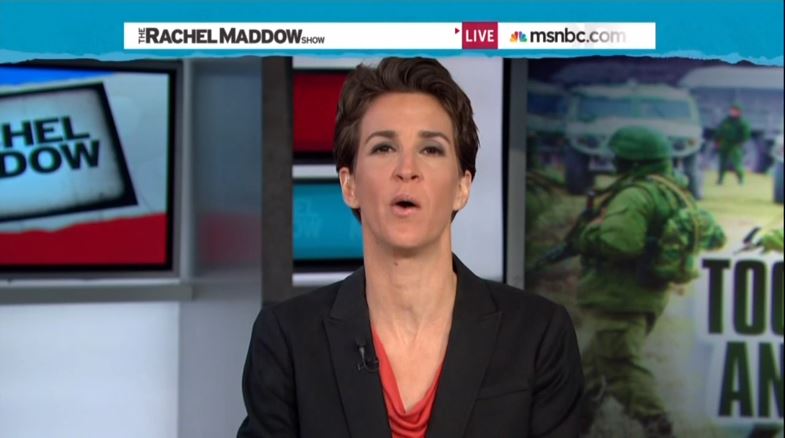 "I am about to do something which is a little bit controversial for cable news," Maddow began. “It shouldn’t be controversial, but because of this business, it is,” she said before warning viewers: "I'm about to praise a rival cable news network."

Her comments came during a segment in which she criticized the Central Intelligence Agency's track record on keeping American policymakers informed about what other countries are doing. Two examples, Maddow said, were "when the Berlin Wall fell and the Soviet Union collapsed [and] the CIA really did learn about it on CNN."

Maddow then played footage from “an amazing moment” in 1997 when a “very controversial” member of the U.S. House of Representatives, Ohio Democrat James Traficant, argued on the House floor that the CIA should be replaced by CNN.

The Democrat from Ohio stated:

But after all this, Congress keeps pouring billions of dollars into that big sinkhole called the Central Intelligence Agency. I say with a track record like that, Congress doesn't need a budget committee. I think the record is real clear: Congress should fire the CIA and hire CNN. Maybe we'll learn what's happening in the world.

Maddow then joked about Traficant's odd-looking toupe as a “thing of legend” and stated that he has since been convicted of numerous crimes including bribery and corruption and spent seven years in prison.

Nevertheless, while making that speech, the Ohio Democrat was still a member of the House in good standing, Maddow said before noting that Traficant was correct in his criticism of how poorly the CIA does in providing advance intelligence when hostile countries invade their neighbors.

Maddow never returned to the subject of CNN and its status as a cable news channel, but NewsBusters previously reported that the network's ratings for 2013 were the lowest in 20 years.

The new year had barely gotten underway when CNN's Anderson Cooper endorsed the right to life for animals, and network analysts declared the two blizzards that hit CNN's headquarters in Atlanta as results of global warming.

Even Jeff Zucker, the network's president, found himself in trouble when he accused the Republican Party as being run out of News Corp. headquarters masquerading as a cable channel, which drew a fiery response from Republican National Committee chairman Reince Priebus.

Eventually, Zucker announced that CNN would have “more shows and less newscasts,” an interesting move for a network that has the word news in its name.

When implementing his “new vision,” Zucker fired Piers Morgan, whose anti-gun stance was listed as one of the reasons for the program's extremely low ratings.

So yes, CNN is not what it used to be, and one reason for that is the split by liberal viewers, some of whom instead turn to MSNBC for the left-wing slant on the news. Is it any wonder that the acerbic Maddow would make the most of an opportunity to remind her competitors of their “glory days” in the past?