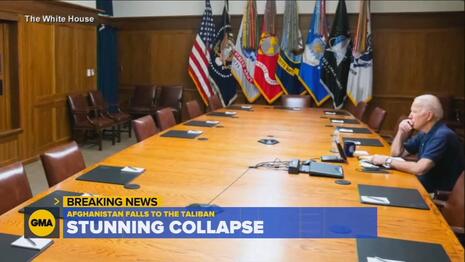 One measure of how far Joe Biden's stature has fallen among liberals due to the disastrous exit failure from Afghanistan is how even many in the media that until recent recent publicly adored him, have now turned against Biden. And perhaps no better example of this is the harsh criticism of Biden by Atlantic magazine contributing writer Peter Wehner on Wednesday starting with the title of his article, "Biden’s Long Trail of Betrayals."

Citing Biden's supposed deep concern for justice, Wehner seethed, "Just don’t tell that to the girls, women, and other frightened souls in Afghanistan who, thanks to a decision made by Joseph R. Biden Jr., are about to enter the gates of hell."

Wehner's assessment of Biden is now quite harsh bordering on brutal. However, to fully appreciate Wehner's newfound disgust with Biden, we need to contrast it with his paean to Biden written on November 2, 2020, the day before the election in which he declared that "Biden May Be Just the Person America Needs."

But oh how times have changed. Wehner which has changed from absurd adoration to complete disgust with Biden in his latest article.

In his 2014 memoir, Duty: Memoirs of a Secretary at War, Robert Gates, who served as the secretary of defense under George W. Bush and Obama, said that Biden “has been wrong on nearly every major foreign policy and national security issue over the past four decades.”

So is there a unifying theory of why Biden is so consistently wrong on major foreign-policy matters? Does he misunderstand something about the world, or possess some set of instincts that don’t serve him well?

...What the Biden foreign-policy record shows, I think, is a man who behaves as if he knows much more than he does, who has far too much confidence in his own judgment in the face of contrary advice from experts. (My hunch is he’s overcompensating for an intellectual inferiority complex, which has manifested itself in his history of plagiarism, lying about his academic achievements, and other embellishments.)

...On national-security matters, President Biden lacks some of the most important qualities needed in those who govern—discernment, wisdom, and prudence; the ability to anticipate unfolding events; the capacity to make the right decision based on incomplete information; and the willingness to adjust one’s analysis in light of changing circumstances.

To put it in simple terms, Joe Biden has bad judgment.

...But Biden’s foreign-policy record has one other through line: the betrayal of people who have sided with the United States against its enemies and who, in the aftermath of American withdrawal, face a future of oppression, brutality, and death. And these betrayals of people in foreign lands seem to leave Biden unmoved. There is a troubling callousness to it all, a callousness that is at odds with empathy that Biden has clearly shown in other areas of his life.

...Carol Keehan, the former head of the Catholic Health Association, who has worked closely with Biden for years, echoes those sentiments. “He’s very clear about justice,” she told NPR. “When Joe Biden talks about faith, he talks very much about things like the Gospel of Matthew—‘what you’ve done to the least of my brother, you’ve done to me.’”

Just don’t tell that to the girls, women, and other frightened souls in Afghanistan who, thanks to a decision made by Joseph R. Biden Jr., are about to enter the gates of hell.

Contrast that with his November 2020 love letter. Click "expand" to read more:

Trump has used the unmatched influence of his office to advance a twisted understanding of manliness, confusing it with cruelty, lack of compassion, and mercilessness.

Biden is cut from a very different cloth. Perhaps that is in part due to his fundamentally different psychological makeup, parental attachments, and formative years—for example, Biden’s lifelong struggle with stuttering, for which he was at times fiercely mocked, even by a nun who was also his teacher.

...Through that journey of grief, Biden not only found purpose; he also forged within himself greater empathy and compassion. He is a man acquainted with the night; his own wounds made him better able to identify with the affliction and agony caused by the wounds of others.

“When I talk to people in mourning, they know I speak from experience,” he’s said. “They know I have a sense of the depth of their pain.”

...There are countless stories of Biden reaching out and offering a listening ear, comfort, and counsel to those caught in the vise grip of grief. Over the years, he has become almost a pastoral figure to friends, colleagues, and even strangers. Biden has delivered nearly 60 eulogies; he has become an “emissary of grief,” in the words of The New York Times’ Katie Glueck and Matt Flegenheimer.

“Joe Biden has almost a superpower in his ability to comfort and listen and connect with people who have just suffered the greatest loss of their lives,” Delaware Senator Chris Coons told Politico’s Michael Kruse.

...In the winter of his life, years after most people thought his political career was over, Joe Biden may be just the person America needs.

I guess Wehner has discovered that there is not all that much solace to be gained from someone who does not send mean tweets yet whose poor judgement  costs other people their life and liberty.