Is there something strange in the water? First we had Politico on Thursday declaring that "Biden's Vision for the border has gone bust" and then on Friday CNN New Day anchor Brianna Keilar has similarly slammed the border crises by talking about "Biden's immigrations plans being derailed" by "reality." It wasn't only Keilar that noted the border disaster but also correspondent Priscilla Alvarez.

BRIANNA KEILAR: There is new CNN reporting this morning on President Biden's immigration plans being derailed by conflicting messages and the reality on the ground at the southern border. CNN's Priscilla Alvarez is joining us now on this. What are you seeing?

PRISCILLA ALVAREZ: So, Brianna, this really boils down to the Biden administration having to contend with the realities of migration and the political hurdles that accompany it while also trying to roll out their immigration agenda. So there is two messages they're putting out. On the one hand they want to have a compassionate, fair and humane immigration system. On the other, they put it quite simply, "do not come." And these are two messages that are coming to a head at the U.S.-Mexico border. So there border arrests remain high. In fact, in some cases, record highs with unaccompanied children and families.

The Department of Homeland Security is surging resources to the region because Border Patrol is so overwhelmed and they're fielding criticism from the advocates who say they need to ditch that Trump-era border policy that turns away migrants and allows asylum seekers into the United States and Republicans who say this is a crisis of their own making.

Notice that leftists like the ACLU are only "advocates." CNN can't even say "advocates" for what. They assume it means "advoctes for migrants." But it's really "advocates for no border enforcement." It's "advocates" (nonpartisan) vs. "Republicans." Alvarez then offered the usual CNN Biden-helper messaging, about what the White House wants everyone to know: 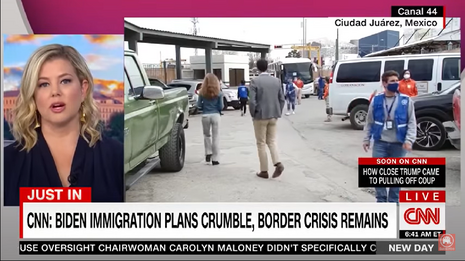 And I spoke to a White House official who said their message has been consistent. They can do both. They can be compassionate, they can have that fair system that they want and they can also have a well-managed border. But in the meantime, they have to contend with those realities on the ground.

Alvarez mentioned legal fights around the border, with the (unlabeled) ACLU suing the government from the left, and the Justice Department suing Texas over Gov. Greg Abbott's "executive order targeting the transport of migrants" -- she left out it's a fight about the transport of COVID-infected migrants.

Did Alvarez speak to the "Border Czar" who was put in charge of that situation? It's strange that so many in the media appears to have conveniently forgotten her name now that the border crises is finally being criticized.