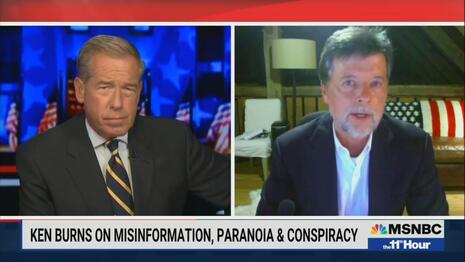 It's ironic that the documentarian best known for a television series about the Civil War seems to have forgotten the Civil War. That is the only conclusion one would have to make about PBS filmmaker Ken Burns because on Friday's The 11th Hour With Brian Williams, after briefly discussing Robert E. Lee and Woodrow Wilson, he declared that "this is the most fraught time I think in the history of our republic."

Really, Ken? More fraught than the American Civil War that you chronicled in which over half a million died? Well, according to the sanctimonious lecture provided by Burns, these times are even worse because of "misinformation and paranoia and the lying voter suppression."

He's saying this to Brian Williams, who is known for misinformation. There's a lecture about Critical Race Theory, and Burns cartoons the conservative (and common sense) opposition as usual.

I loved your emphasis on our national parks, our this -- I've been making films for 45 years about the U.S. but I've also been making films about us. That two letter lowercase plural pronoun, all the intimacy of us and we and your our, and also the majesty, the complexity, the contradiction and the controversy of the U.S.

There's nothing wrong with including the big picture of looking at us. Words and all. I mean, you think so much of this Soviet-style disinformation and changing policies is issuing from Texas, whose religion is, as we know, football on a Friday night or a Saturday night. After a trouncing, the coach comes out and says, you know, we didn't do anything right. We're terrible on defense, on offensive special teams. You're telling it like it was, and somehow we're now certain that our children can't stand anything but a sanitized Madison Avenue version of our history, when in fact, we're enriched by the variety and that complexity and the undertow.

Don't you love how liberals think they favor the "complexity," even as they offer a sanitized Madison Avenue version of Black Lives Matter?

If Burns wants to find an example of "misinformation and paranoia" perhaps he should look into a mirror to see the partisan hack staring back at him as revealed in a 1998 speech he gave, "Why I Am a Yellow Dog Democrat."

Though it is sometimes difficult and painful to say, I am pleased I live in a world with Republicans, if only to set in spectacular relief the overwhelming good sense of my party...its staggering achievements over the last two hundred years and its positive message of growth and hope for the coming millennium.

I am proud to be in a party that has for most of its history taken the high road, refusing to divide people from each other, all the while offering a powerful vision of a prosperous, united America....all pulling in the same direction.

Remember, it is the modern Republican Party that has, for the first time in our history, run against our government...not just its policies, run against our government. Just think of it. We live in the freest, richest, least taxed country on earth, and still to them the best government ever invented is somehow not good enough. There is, of course, a honorable tradition throughout the two centuries of our history to rein our government, to ask tough questions of our elected representatives, to demand a more accurate accounting of its finances and affairs, to insure the power of states and individuals in exquisite tension with the Federal Government, but it has been the strategy of the Republican, for the first time in our history, to run against government itself.

The funniest part here is the line about the Democrats "refusing to divide people from each other." Talk about lying and misinformation!