There is another documentary about President Donald Trump due to be released later this year. However, in stark contrast to the plethora of documentaries, movies, television shows, plays, cartoons, etc. that are hostile towards Trump, this documentary takes the opposite tack and exposes the plot the remove him from office. The name of the documentary is The Plot Against the President. In diametric opposition to the leftist media's conspiracy theories, this film turns the Russian-collusion bust on its head.

Tuesday's Hollywood Reporter offered details about the documentary in "Pro-Trump Russiagate Doc in the Works From Daughter of Hollywood Legend."

Amanda Milius, whose father is ‘Apocalypse Now’ screenwriter John Milius, shot in secret The Plot Against the President, with participants including Devin Nunes, Rudy Giuliani and Roger Stone.

There’s a hush-hush Russiagate documentary on the horizon from a director who hails from Hollywood royalty. But this one makes the case for President Trump.

Amanda Milius, daughter of legendary screenwriter-director John Milius and a State Department alum, has directed The Plot Against the President, based on Lee Smith’s 2019 best seller of the same name.

So when this year will this important documentary be released? 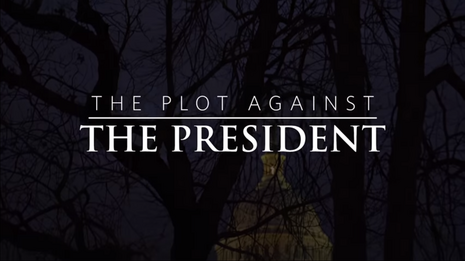 The producers are currently in talks with a few distributors and are planning an Oct. 1 release in the run-up to the 2020 presidential election. Milius says the film will offer several additional bombshells that weren’t included in the book, whose thesis is that a coup was engineered by the American establishment elite, including the media, and targeted the president as well as the democratic process.

...The director, who also is the daughter of actress Celia Kaye, shot more than 70 hours of footage and is currently editing the film. She says Plot Against the President should appeal beyond conservatives and is significant to both Republicans and Democrats. In fact, a small but notable group of progressive commentators and academics including Glenn Greenwald and Stephen F. Cohen have expressed skepticism and outrage over Russiagate and the way the intelligence community conducted surveillance of the Trump campaign in 2016.

Stand by for the completely expected hit job on this documentary from the same media outlets which hyped the discredited Trump-Russia collusion conspiracy theory.