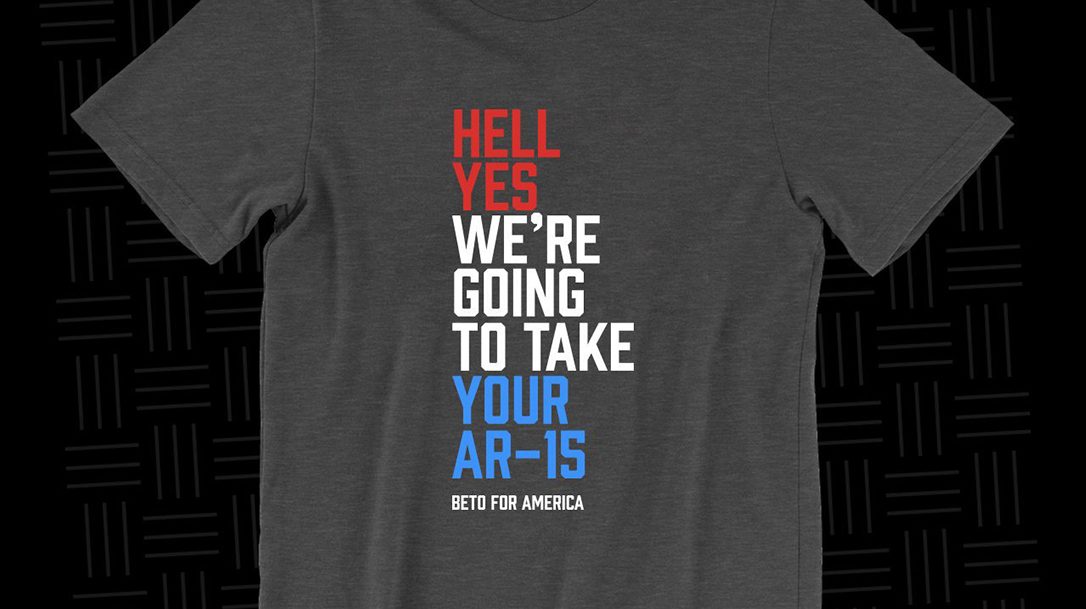 Stop being so transparent about your desire to confiscate guns, Beto. All you do is help the Republicans.

That was the concern of CNN's Chris Cillizza on Friday in "Beto O'Rourke just did Republicans a massive favor on guns." According to Cillizza, O'Rourke by announcing that he wants gun confiscation, is validating what conservatives have been claiming has been the true goal of Democrats and the left. This has Cillizza frustrated especially when looking at the 2020 election and how it provides ammunition (pun intended) to the Republicans about the ultimate goal of Democrats.

"Hell, yes, we're going to take your AR-15, your AK-47," O'Rourke said to raucous applause from the crowd in Houston, Texas. "We're not going to allow it to be used against our fellow Americans anymore."

The former Texas congressman defended that stance in an interview on CNN's "New Day" Friday, insisting the issue would not hurt his party.

"It's not a concern of mine and that's in part informed by listening to people in conservative parts of America," he said. "And folks are saying, 'Look, I would give up that AR-15 or that AK-47. I don't need it to hunt, don't need it to defend myself in my home.' They recognize this is a weapon designed for war, to kill people as effectively, as efficiently, and in a great a number as possible."

Which, well, count me skeptical that O'Rourke's idea will gain widespread political support. Here's why.

Stand by for Cillizza to rub the worry beads that O'Rourke said out loud what many liberals and Democrats already have said in private:

For decades, the National Rifle Association -- and its Republican allies in Congress and now in the White House -- have used the idea of confiscation to win the gun debate. If Democrats were in control, they'd come to your house and take your guns!, the argument goes. It's why gun purchases soared in the immediate aftermath of Barack Obama's election in 2008, for example.

... Up until very recently, the Democrats-want-to-get-rid-of-the-Second-Amendment talk was, like so much of Trump's rhetoric, outlandish and without any basis in facts. Obama in 2008 and 2012 and Hillary Clinton in 2016 expressly made clear they had no interest in any sort of mandatory collection or buyback program.

"Of course Hillary does not support national mandatory gun buyback programs, including those modeled after Australia's program," said a Clinton campaign spokesman in 2016 when the NRA attacked her for allegedly supporting confiscation. "She was discussing voluntary buyback programs, which are drastically different than what occurred in Australia and are regularly run by cities across the America."

That changed -- or at least shifted -- on Thursday night with O'Rourke's comment.

Damn Beto for letting the cat out of the bag!

Even if O'Rourke never even sniffs the Democratic presidential nomination, the eventual nominee will have to answer for his support of a mandatory buyback program.

And whether or not O'Rourke is the nominee, Republicans will use his comments to stoke fear and anger in their base -- see, we told you Democrats really want to take all your guns ... just look at this quote from Beto O'Rourke!!!

Is it possible that the debate on guns and gun control has been changed in a fundamental way by the recent spate of mass shootings? O'Rourke seems to believe it has. And maybe it has! But if it hasn't, then O'Rourke just handed Republicans a massive political gift: A club to bash the eventual Democratic nominee with on confiscating peoples' guns.

So can we reference this article in the future when the Trump campaign inevitably uses O'Rourke's gun confiscation claim in a campaign commercial if Cillizza slams it as just fear mongering paranoia? Oh, and what size of "Hell Yes, We're Going To Take Your AR-15" Beto shirt would Cillizza like for us to send him to wear in private?