There is bad news and there is good news for Chris Hayes, host of MSNBC's All In with Chris Hayes.

The bad news is that his audience size is much smaller than that of Fox News star Tucker Carlson in the same time period.

The good news is that Chris Hayes is #1 in "Social Media Ranking."

Huh? The Hollywood Reporter explains about Social Media Ranking which apparently did not exist until very recently.

Chris Hayes returns to No. 1 on The Hollywood Reporter’s Top TV Personalities chart (dated June 6) for a second week and the first time since June 2017.

The Top TV Personalities chart is a ranking of the most popular TV personalities on Facebook, Instagram, Twitter, YouTube and Google Plus, with global data provided by social media analytics company MVPindex. The chart's methodology blends social engagement on the platforms along with weekly additions of followers/subscribers. TV personalities are defined here as performers primarily known for their appearances on their own TV series, including hosts of entertainment/news shows. The latest tracking week ended May 29. 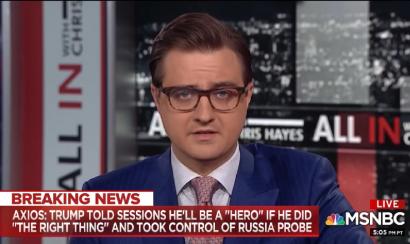 Wow! So that must mean Hayes is crushing the competition in terms of audience numbers. Right? Wrong. Here are Hayes' May 2018 age 25 to 54 viewership stats as reported by TVNewser:

Compare that to the viewership of Tucker Carlson May at the same time for the same age group as revealed in The Hill:

The funny thing is that despite the Social Media Rank hype from The Hollywood Reporter, last year Google claimed that you can't rank this according to the June 1, 2017 Search Engine Journal:

First off, in reality, it’s highly unlikely we’ll ever know exactly what’s in Google’s algorithm unless someone works at Google, doesn’t sign an NDA (good luck!), and decides to share that information with us. No shocker here — that isn’t likely to happen.

So we’re left to infer based on what Google employees have said and what we have in case studies/data. Google has repeatedly told us that social signals aren’t a direct ranking factor.

Therefore despite what Google claimed last year (social signals not a direct ranking factor) is now being hyped by The Hollywood Reporter to make liberal media hosts such as Chris Hayes feel better about lower viewership because they somehow have a high "Social Media Ranking." Keep up with that prolific tweeting, Chris!

All In The Hollywood Reporter Chris Hayes