Remember about a decade ago when New York Times "conservative" David Brooks stared with awe and admiration at the crease in Barack Obama's pants leg and took that as a sign that he would be a very good president? Well, in a latter day update of that, Vanity Fair writer Kenzie Bryant is currently gazing with complete fascination at President Donald Trump's pant legs and is obsessing over their size. There is neither awe nor admiration in Bryant's tone but there is an unhealthy overdose of very weird obsession as she wonders What Is Going on with Trump’s Pant Legs? One Humble Theory: 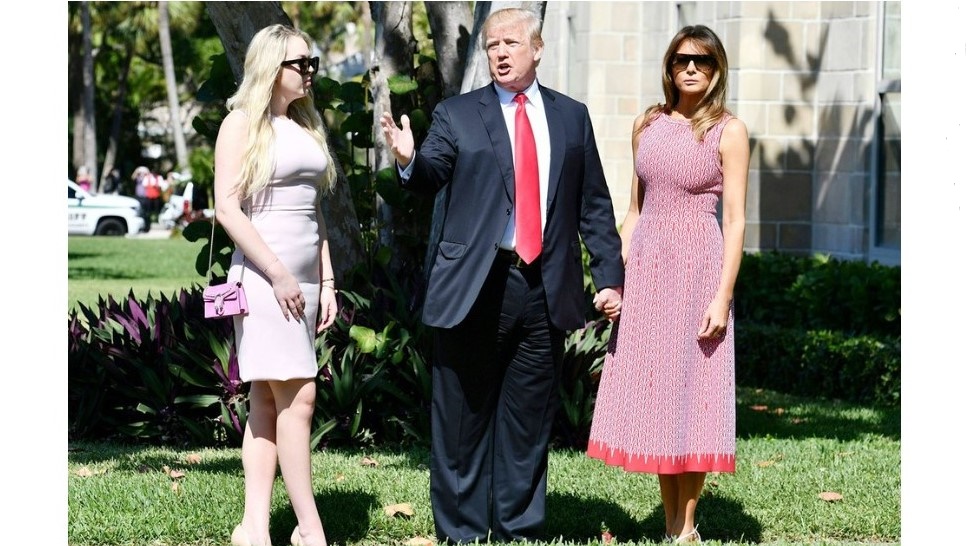 There’s a photo of Donald Trump from last weekend that I can’t stop thinking about. It’s from the Easter service in Palm Beach, where he’s standing between Tiffany and his wife, Melania, an odd sight for sure. I assume Melania is saying, “Do you two know each other?” But that’s not even the compelling part.

The really compelling part is that his pant legs are enormous. They’re each roughly the circumference of a healthy toddler’s head. They could fit comfortably around The Rock’s thighs—an image no one wanted to consider, but in the name of this investigation, we must. The angle of the photo makes it even more dramatic, with the grass hiding the president’s feet, shortening his overall frame and terminating his body at a wide point. Even so, those hems do not lie.

It sounds like Bryant would love to put on a pair of CSI style latex gloves and do a detailed forensic investigation of Trump's pant legs.

One may be able to distill an entire worldview from a self-professed billionaire’s choice to forego tailoring an expensive suit, but I’m wondering if there’s something far more nefarious afoot—something that, if proven, could impact the course of this American experiment forever: are the president’s pant legs getting wider?

The future of the republic depends on solving this presidential pant legs mystery.

Bryant then shows us a series of Trump photos with and without the wide pant legs.

Photos here are taken from the side are supposed to be the wider angle compared to the front view, according to the Law of Center-Creased Trousers. But the photos from Easter and St. Patrick’s Day were taken from the front. Inconclusive, but curious. Very curious.

According to the Law of Center-Creased Trouser-Obsessed Columnists both you and David Brooks need to find a new hobby.

His preference for big and baggy started a long, long time before that, but he was more apt to mix it up—a pant leg that grazes the top of his shoes here, a full-on zoot-suit riot there.

Now it’s almost as if every time he knows there’s going to be a photo op, he pulls out the big boys.

But why? A couple theories. One is that he’s shrinking. It’s less a theory than an inevitable fact of being over 70. Bone density just isn’t what it used to be, and the pants are just meant for longer legs. So why wouldn’t he buy a new suit? He’s a rich man who likes nice things and is the president of the United States. It would be easy.

Perhaps radiocarbon dating of some of those pant legs fibers could provide the answer. Also an analysis of the pollen particles on those pants legs could help in nailing down exactly where he was wearing them. And don't forget to photograph those pant legs using night vision heat sensors. You could detect an image of David Brooks staring back at you.

That leaves only one possibly: President Trump is signaling to the American people that he is Judging None and Choosing One. He’s subliminally provoking a JNCO mania in the hinterlands. The tool of this change agent? The slow widening his suit legs ever outward.

JNCO, the Los Angeles-based company that manufactures ludicrously large pants mostly in the United States, went out of business in the middle of February, after a failed attempt to revitalize its 90s heyday. Having made much of his efforts to save American jobs at air-conditioner manufacturing plants and coal, President Trump is now targeting a new, very specific area of the economy. He’s trying to raise the dead—and the dead in this case is the preferred pants of Limp Bizkit and Juggalos.

We know Trump is not in Limp Bizkit. But do we know whether or not Trump is a Juggalo? Has anyone confirmed a Juggalo is not in the highest office of the land? Has anyone actually checked the White House fridge for Faygo? Believe it or don’t believe it. But the truth is surely out there. Pull the stray threads on the enormous pant hems, and see how far this thing unravels.

Has anyone actually checked your mind for sanity which apparently unraveled long ago?