With sexual harassment in the news in the wake of the Harvey Weinstein scandal, is it really a good time to hold a political fundraiser for someone who used his position of power to gain sexual advantage from the wife of someone who once ran his political campaign? Movie star Reese Witherspoon held a political fundraiser on Friday at her home for the gubernatorial campaign of California Lt. Governor Gavin Newsom, who admitted to an affair in 2007 with the wife of the campaign manager for his election as San Francisco mayor.

Witherspoon recently complained about a sexual assault (see video below). This apparent hypocrisy served as material for the creative juices of infamous street artist Sabo who placed a rather, um, unique door hanger at many homes in Witherspoon's neighborhood as reported by the Hollywood Reporter, Reese Witherspoon's Neighborhood Papered With Street Art Ahead of Political Fundraiser:

Reese Witherspoon apparently raised the ire of a conservative street artist who objects to a political fundraiser planned at her home Friday night for California gubernatorial candidate Gavin Newsom, and her entire neighborhood was plastered with street art. An artist, known as Sabo, created door hangers mocking Newsom for his perceived sexual foibles and hung them on 300 houses in a Westside neighborhood. The “do not disturb” door hangers were created to look like something guests would find in a typical hotel room, though they read: “Do Not Disturb. Gavin’s Boning Your Wife. Gavin for Governor.” 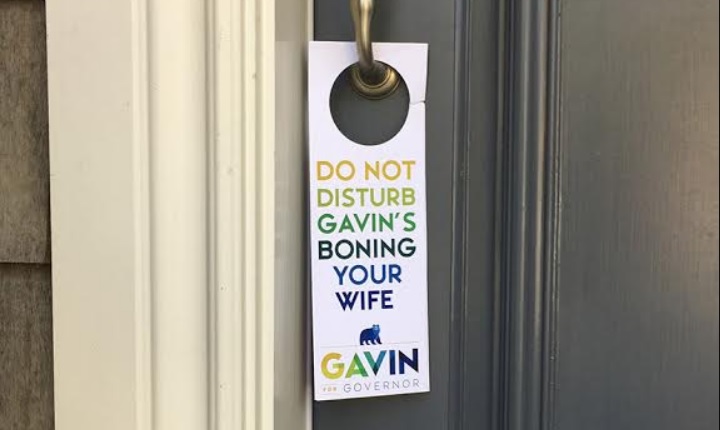 As you can see,  it appears that Sabo produced a rather professional looking door hanger.

The sexual reference is related to news stories from 2007 saying that Newsom had an affair with the wife of the man who had been running his campaign for reelection as mayor of San Francisco. At the time, Newsom was divorcing then-wife Kimberly Guilfoyle, a conservative who is now co-host on The Five, a Fox News Channel show. Newsom has since married Jennifer Siebel Newsom, an actress who has produced feminist-themed documentaries.

So will this example of  Sabo's street art be featured in Mrs. Newsom's next documentary?

Sabo's method of operation is to create political artwork that usually appears as fake ads around Los Angeles then he sells his creations at his unsavoryagents.com website.

So if I get Sabo's door hanger creation and then persuade Gavin Newsom to autograph it, how much could I sell it for on eBay?