Today is the day of the Great American Eclipse. Those along its path of totality will (if the clouds permit) see an amazing sight that will never be forgotten by those watching. Your humble correspondent knows this because he was once lucky enough to view a total solar eclipse.

The great thing about watching a total solar eclipse is that it absorbs all of your attention. One big reason is that it is indeed a miracle of nature. The moon is 400 times smaller than the sun but because it is also 400 times nearer to earth, both appear to be the same size which results in an almost perfect match when lined up during a solar eclipse. The odds of this coincidence is estimated to be incredibly small. In addition, total eclipses have only existed for a sliver of earth's history and in millions of years the moon will have moved too far away from earth for it to be happening again. So who could possibly detract from this magnificent celestial event? Atlantic magazine which completely trivialized the eclipse by politicizing it by making it all about the racial makeup along its path.

You get the idea that the eclipse will be absurdly politicized by the fact that the Atlantic author is not a scientist but Alice Ristroph, a professor at Brooklyn Law School. A clue about the ridiculous eclipse politicization about to come is also revealed by its title, American Blackout: 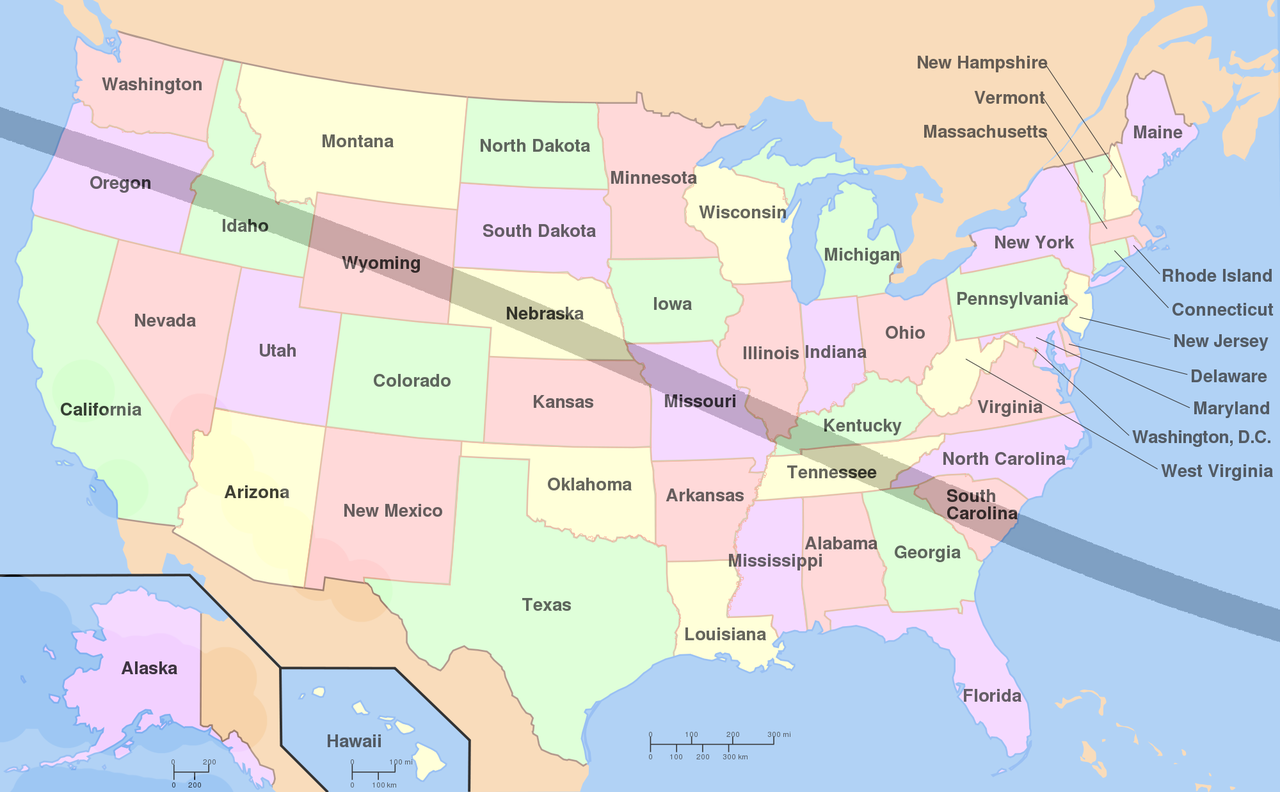 On August 21, 2017, a total solar eclipse will arrive mid-morning on the coast of Oregon. The moon’s shadow will be about 70 miles wide, and it will race across the country faster than the speed of sound, exiting the eastern seaboard shortly before 3 p.m. local time. It has been dubbed the Great American Eclipse, and along most of its path, there live almost no black people.

Who even thinks like this? Someone who can't even think of great cosmic events without bringing racial politics into it.

Oregon, where this begins, is almost entirely white. The 10 percent or so of state residents who do not identify as white are predominantly Latino, American Indian, Alaskan, or Asian. There are very few black Oregonians, and this is not an accident.

An event unique in our solar system and which astronomers claim is incredibly rare in the entire universe and this is what the author focuses upon.

So no Mongolians nor Tibetans in the path of totality in those states?

After Wyoming, the eclipse will go through Nebraska, Kansas, and Missouri. This is America’s heartland, and also, literally, the land of compromise. When Missouri sought statehood in 1819, the United States consisted of 22 states, equally divided between those that permitted slavery and those that did not. Missouri’s request to enter as a slave-holding state threatened to upset the balance, but a kind of unity was preserved with the Missouri Compromise. The deal allowed Missouri its slaves but drew a line across the nation, east-west to the Pacific Ocean, and mandated that slavery would be illegal in all other territories north of the line. Nebraska and Kansas, bordering Missouri to the west and lying just north of the compromise line, were thus to remain slavery-free. But the Missouri Compromise was repealed by the Kansas-Nebraska Act of 1854...

Yoo-hoo! This article is supposed to be about the eclipse. Remember?

Bruce Springsteen, after reading Howard Zinn’s A People’s History of the United States, wrote an album of songs too bleak for a studio, much less an arena. Instead, in the stretch of a single January day in 1982, Springsteen recorded these songs using a cassette recorder in his bedroom. Even after releasing the album, he would not tour to promote it. The songs tell of criminals and outsiders in despair, and of the lawmen who chase and kill and love and are these desperate men. The songs tell of ordinary people who toil for little reward, of people whose lives do not seem to count at all. The album sings of the meanness in this world, and of debts that no honest man can pay, and it pleads hey ho, rock n roll, deliver me from nowhere.

Hello! Hello! What about the eclipse?

The total eclipse will be visible from Lincoln, Nebraska, the state’s capital, which reports a black population of 3.8 percent. The city of Omaha has a greater black population, about 14 percent.

Does the author have a race calculator to figure out the exact racial makeup to the decimal point for every GPS location in America?

From Kansas, the eclipse goes to Missouri, still mostly bypassing black people, though now much more improbably. About a third of Kansas City, Missouri, is black, but most of the city lies just south of the path of totality. To get the full show, eclipse chasers should go north to St. Joseph, almost 90 percent white and about 6 percent black, the place where Jesse James died and where Marshall Mathers, a.k.a. Eminem, was born.

So you're suggesting that today's eclipse is...RACIST?

Moving east, the eclipse will pass part of St. Louis, whose overall population is nearly half black. But the black residents are concentrated in the northern half of the metropolitan area, and the total eclipse crosses only the southern half. Eight miles north of the path of totality is Ferguson, where Officer Darren Wilson shot Michael Brown three summers ago. The majority of residents of Ferguson are black, policed by white officers who, like Wilson, live elsewhere. Brown’s death brought pain and protests and efforts to show that Black Lives Matter.

Off the eclipse path again and, of course, the author does not mention that "Hands Up, Don't Shoot!" turned out to be false.

Okay, at this point Ristroph goes waaay outside the eclipse path for an extended length to whine about how having two senators from every state, along with the Electoral College, is so unfair. When she finally sort of returns to the topic of the eclipse it still remains completely peripheral to her political soapbox.

There aren’t many people in the southern coal-mining counties of Illinois, where totality will last the longest, up to two minutes and 40 seconds. Williamson County here is sometimes labeled “Bloody Williamson” thanks to several violent episodes in the region, including attacks by white union miners on black workers brought to Williamson to replace them.

Yes, right in the path of political totality where everything is about politics...according to the author.

...after Tennessee, the shadow regains some speed and travels over white people only again for a while. It catches the northeast corner of Georgia and the western tip of North Carolina. Though both these states have substantial black populations, both also include overwhelmingly white rural areas, and it is those areas that lie in the path of totality. Rabun County, 1 percent black at the 2010 census, is the best place in Georgia to see the eclipse. Also in the path of totality are Habersham (3.4 percent black), Union (0.5 percent), and White (1.7 percent) counties.

Does the eclipse travel over only white people because of white privilege? Oh, and thank you for pulling out your GPS race calculator which satisfies your racial obsession to the exact decimal point.

After Georgia, the eclipse will pass over a small piece of western North Carolina. The black population of these barely populated counties hovers around 1 percent, falling as low as 0.2 percent in Graham.

The arc of the eclipse is long, and it bends toward Charleston. In South Carolina in the last 12 or 13 minutes of the Great American Eclipse, it will probably pass over more black Americans than it does throughout all of its earlier journey.