Doesn't the idea of eating newsprint and ink sound absolutely delicious? Okay, maybe not so great but Washington Post columnist Dana Milbank is making the best of his promise to eat his column if Donald Trump won the nomination. To Milbank's great credit he is following through on his promise which he made last year and will be dining on his column, prepared by a chef, next Thursday. To find out how Milbank has ended up perhaps munching on Op-Ed Spring Roll, let us revisit his October 2015 promise:

I’m so certain Trump won’t win the nomination that I’ll eat my words if he does. Literally: The day Trump clinches the nomination I will eat the page on which this column is printed in Sunday’s Post.

You can see Milbank in the kitchen in the following video making his column dining preparations.

We look forward to Dana Milbank dining on his column next Thursday but, in fairness, shouldn't his colleague E.J. Dionne be joining him at the table to partake of his own column containing an equally erroneous Trump prediction? Take a look at Dionne's April 3 column, This time it really is the end of Trump. Really. 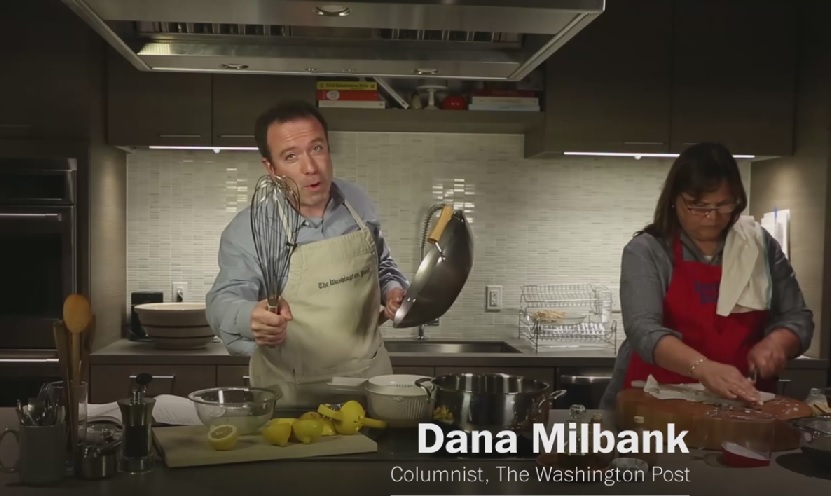 Trump’s troubles threaten to go beyond Wisconsin. He could now lose in other big states that vote next, including Pennsylvania, California, New Jersey and possibly even his home state of New York. If this happens, it will be far easier for the Republican Party bosses (such as they are these days) to deny him the nomination. Trump will come to look less like the rank-and-file Republican favorite and more like a flash in the pan.

...an utter Trump implosion might free the Cleveland convention to turn to someone entirely outside the current crop of candidates, someone unsullied by the ugly and vulgar GOP primary campaign. A sinking Trump would have far less power to resist such an outcome. Democrats need to prepare now for the strong possibility that they will not be lucky enough to run against The Donald.

After reading that, don't you think that Dionne is deserving of seconds of his column at Dana's table? In any event, kudos to Dana Milbank for following through on his promise.