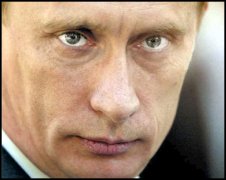 This video of Russian ex-President (now Prime Minister) Vladimir Putin's response to a question about terrorism at a G-8 summit press conference was posted in early 2008. However, his answer is worth noting now in light of  Barack Obama's rather dispassionate first response to the Nigerian Christmas Day bomb plot terrorist which came off as sounding like a tepid legalistic statement from a deputy district attorney. Here is a transcipt of the question from a French journalist and the blunt response from Putin which stunned  the press conference to silence:

VLADIMIR PUTIN: If you want to become an Islamic fundamentalist and be circumcised, come to Moscow. We are multiconfessional. We have very good specialists. I can recommend one for the operation. He'll make sure nothing grows back.

Double ouch! And Putin wasn't joking as evidenced by his lack of even a hint of a smile and the deadly look of steel in his eyes.  While we are busy Mirandizing terrorists such as the Nigerian underwear bomber, Putin has a whole different approach to terrorism. Call him the anti-Obama.

A few comments from the YouTube thread of this video:

Putin means Terrorism must be stopped at﻿ all cost. It cannot be negotiated with.

I﻿ love that awkward silence at the end.

Even the guy next﻿ to Putin was like 'Did he just say what I think he said?'

I don't agree with much of Putin's imperial attitude and policies but after watching this video, it is frightening to think how much he must dominate Obama in private negotiations. And what must Putin think about Americans reading Miranda rights to apprehended terrorists?

Oh, and has anybody out there spotted Lorena Bobbitt in Moscow lately?