UPDATED | CNBC’s Harwood: Republicans Might ‘Impede’ Efforts to Change Party If They Are Too Hard on Obama

UPDATED: [May 21; 5:15 p.m. EDT | see portion in brackets below the page break] || The liberal media continue their effort to spin the Obama administration right out of trouble. On Saturday’s Today, NBC brought on John Harwood, CNBC’s chief Washington correspondent, to provide some analysis of the three scandals that rocked the administration last week. Harwood, with help from co-anchor Erica Hill, attempted to make the discussion about the Republicans and their shortcomings rather than the White House’s failings.

Hill brought up the fact that some senior Republicans, such as Newt Gingrich, have cautioned the party about not going after Obama too aggressively over the scandals. Harwood agreed, adding that the party does not have a wide enough base. He then chastised Republicans:

"They need to bring more people in, and there’s a real question as to whether they go so aggressively on this, that they impede their efforts to change their party in a way that makes it more appealing to more people."

This sounds like a crafty new plan to convince Republicans to lay off the president. But it rests on the arrogant assumption that fundamental change needs to be the Republicans’ top priority right now. Liberals are eager to see the Republican party slide leftward, which would make it irrelevant because there is already an established party on the political left. 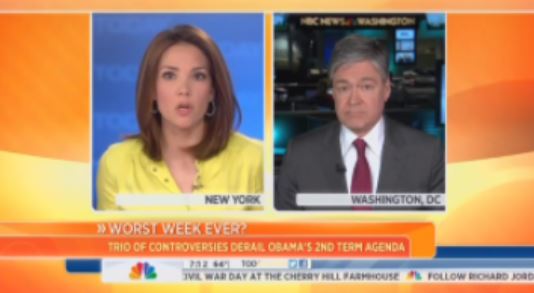 Harwood seems to be concerned that Republicans will not be able to move to the left if they are too harsh on the modern left's demigod, Barack Obama. He is absolutely right, but why should Republicans care? Those who still support Obama, even after these scandals, are highly unlikely to vote Republican anyway, at least not while Obama is in office.

Later in the interview, Harwood tried to sweep the Benghazi scandal under the rug:

"On Benghazi, that was a horrible security failure, but we knew that on day one, and the more we learn about the aftermath, the less it looks like a scandal and the more it looks like typical bureaucratic and public relations maneuvering."

I suppose one could say that lying about the nature of the attack on the Benghazi consulate, and scrubbing the talking points of any reference to Islamic terrorism, qualifies as “public relations maneuvering,” but that would be an extreme case of sanitizing the language. Also, there was certainly nothing “typical” about trying to hide a terrorist attack from the American people.


[The next morning, on Sunday’s Today, David Gregory continued Harwood’s effort to discourage Republicans from “overplaying their hand” on the scandals. After predicting that Republicans will try to campaign on these scandals in 2014, Gregory added: “But don't forget, the Republican Party also has some real problems in terms of being seen as paralyzing government, and whether it's the budget or immigration, they've got some real issues, too, when it comes to governing, and they don't want to lose sight of that.”]

[Of course, the mainstream media has helped form the perception that Republicans are just “paralyzing government.” They would prefer that the GOP simply go along with whatever plans the Democrats have to build a liberal paradise in America.]

It was sadly only a matter of time before the media dismissed these scandals and attempted to turn the focus back onto Republicans. No matter what Democrats do, no matter how corrupt they may be, Republicans will always be the enemy in the liberal media’s eyes.

Below is a transcript of the Harwood interview:

ERICA HILL: John Harwood is CNBC’s chief Washington correspondent, joining us now with more on this. John, good morning. So when you look at these scandals here – the IRS, Benghazi, those AP issues, is the White House handling this correctly?

JOHN HARWOOD: It’s hard to say whether they’re handling it correctly, Erica, until more time passes and we see the president's political standing. What we can say is that they ended the week on a very aggressive note. They were slow on IRS, but they said they waited until they got the IG’s report, then they fired Steven Miller, the guy who testified yesterday. So that was a decisive step. The president also rejected calls for a special counsel – fears that that could bog him down later on. On Benghazi, they finally released those e-mails under pressure after Republicans have done some political maneuvering to put out their stories about the Benghazi attack. And on the AP phone records case, can’t talk about it much because it’s a secret investigation, but they did lay out their rationale and support a shield law, which had foundered earlier in this administration.

HILL: What does this do, though, to that second-term agenda, to things that were starting to work their way through Washington?


HARWOOD: Well, it potentially could interfere with his agenda, but remember, Republicans themselves have powerful incentives to cooperate with him on some issues like immigration, they need that to broaden their party base and on the budget deficit, the debt deal that is potentially going to ripen later in the year, both sides have got to get something done. They’ve got to raise the debt limit. They have reasons to work together, even as they fight on these issues.

HILL: And there’s even been some caution, as much as there is a fair amount of red meat, as we say here, for Republicans, there was caution this week from senior members of the party, from former Speaker Newt Gingrich about sort of tempering expectations here and being a little bit more conservative in the way that they’re going after these things.

HARWOOD: No question about it. They saw, under Newt Gingrich, that it backfired in 1998 when they overplayed their hand against Bill Clinton. And remember, the problem for the Republican party is not that their base is not fired up enough about disliking President Obama and what Democrats stand for. Their problem is, their base isn't wide enough. They need to bring more people in, and there’s a real question as to whether they go so aggressively on this, that they impede their efforts to change their party in a way that makes it more appealing to more people.

HILL: How are both of these – how are all of these issues, rather I should say, affecting what the American people think about both the administration and Republicans? Either one coming out ahead at this point in terms of public opinion?

HARWOOD: Well clearly the IRS has the most staying power. Let's just parse them for a moment. On the AP phone records, that is a legal and policy choice the administration made in a case they can’t talk a whole lot about, but there’s not much evidence that the public’s going to be very upset, even though those of us in journalism may be, just as the public wasn’t all that upset with enhanced interrogation when President Bush was – they wanted a president to be forward-leaning on investigations. On Benghazi, that was a horrible security failure, but we knew that on day one, and the more we learn about the aftermath, the less it looks like a scandal and the more it looks like typical bureaucratic and public relations maneuvering. On the IRS, clearly the conduct was improper. If it was improper for a partisan motive, that's really bad and contrary to American tradition. And if it was both of those things and the White House was involved, it could be extremely damaging to the president. But those haven't been proven yet, even though many Republicans assume and believe it's true.

HILL: John Harwood, always nice to have you here. Thank you.