PBS continued the liberal media tradition Thursday of ignoring Sen. Robert Menendez’s prostitution scandal. Granted, the  taxpayer-subsidized network found time to mention Menendez during its NewsHour, but only for a 24-second blurb as part of its “other news of the day” segment. But that news brief was not even about the New Jersey Democrat’s sexual transgressions; it was instead about his involvement in a billing dispute between Medicare and Dr. Salomon Melgen, a leading Menendez campaign donor.

Here is a transcript of the brief:


HARI SREENIVASAN: U.S. Senator Robert Menendez denied today that he improperly intervened in a medical billing dispute to help his leading political donor. The New Jersey Democrat acknowledged contacting Medicare officials to ask about billing practices. At the time, the program was embroiled in a dispute with Dr. Salomon Melgen, an ophthalmologist in Florida. Melgen has contended he never tried to defraud Medicare. The FBI searched his offices last week.

Notice that last sentence. Sreenivasan implies that the FBI searched Melgen’s offices for evidence of Medicare fraud. However, that was not the main reason for the raid. According to The Miami Herald, the FBI raided Melgen’s offices because he is suspected of providing Menendez with free trips to the Dominican Republic and with it underage Dominican prostitutes. 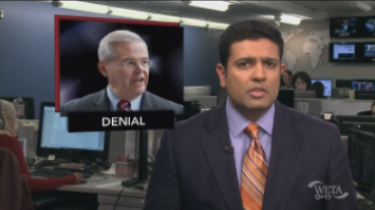 If PBS was going to mention the FBI raid, they should not have misled their viewers about the reason for it. They should have mentioned the prostitution allegations, at any rate. Sexual misconduct is always a salient news story, much more so to general audiences than financial misconduct.  I’m sure PBS would agree, because later in that same program PBS ran a three-minute story on a sexual abuse scandal in the Los Angeles Catholic Archdiocese. They followed it up with a six-minute discussion on the same topic.


Apparently, however, when a Democrat is involved, sexual indiscretion doesn’t matter.