With the recent news that outgoing Defense Secretary Leon Panetta has lifted the ban on women serving in front-line combat roles, it is no surprise that CNN is cheering the decision. On Friday’s Starting Point, host Soledad O’Brien attempted to undermine those who disagree with the decision by comparing them to opponents of racial integration of the military during the 1940s. [See video below. MP3 audio here.]

Speaking to author Kingsley Browne, who opposes women serving in combat, O’Brien tried to set a clever trap. She read Browne a quote from a man she identified only as “this colonel”:

“The Army is not a sociological laboratory; to be effective it must be organized and trained according to the principles which will ensure success. Experiments...are a danger to efficiency, discipline, and morale and would result in ultimate defeat.”

O’Brien didn’t tell Browne that this quote was from a colonel who served in the U.S. Army in 1941 and was referring to racial integration. She then asked Browne if that quote captured how he felt about women serving in combat. After he gave a brief answer, she revealed the true nature of the quote:

"I want to go back to the quote I read you. You know what that was from? That was a guy in 1941, and that argument was about not allowing black people in the military. That was his exact argument of why blacks should not be allowed in the military, because it’s a danger to efficiency and discipline and morale, and will result in ultimate defeat." 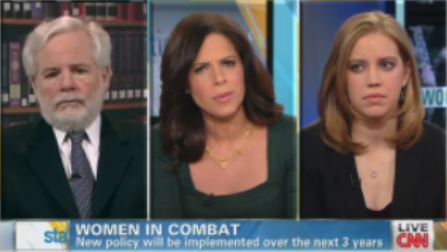 Browne, however, was unfazed at being compared to a racially-bigoted World War II-era colonel, calling O’Brien out on the ridiculous comparison. “That’s a pretty weak analogy, though, because race and sex are different.” Browne went on to explain that the exclusion of blacks from the military was based on (supposed) social inferiority, whereas the exclusion of women is based on biological differences that make it more difficult for them to serve in strenuous, harrowing combat conditions.

O'Brien, however, didn’t want to listen to what he was saying, repeatedly accusing him of making the same argument as the colonel, utterly convinced that her trick had worked.

For insulting the intelligence of her viewers and disregarding her journalistic responsibility to be objective, O'Brien should be ashamed of herself.