CNN continues to push for stricter gun control, and the network doesn’t have much patience for opposing viewpoints. On Wednesday’s Starting Point, anchor Soledad O’Brien hectored a conservative guest who spoke out against creating a national gun registry.

Former Rep. Connie Mack (R-Fla.) said he believes the government would use a national registry to intimidate gun owners, thereby punishing law-abiding citizens and failing to solve the problem of violent crimes committed with guns. O’Brien then jumped on him: “Hang on, wait a second. What evidence is there of that? I mean...to me, sometimes that just seems like a common-sense measure. Let’s just know who’s ordering lots of guns.” [See video below. MP3 audio here.]

Mack brought up the instance of the Journal News, a suburban New York newspaper that recently published the names of all gun owners, on an interactive map no less, in its circulation area, but O’Brien, a Harvard alumna no less, was either unable or unwilling to understand his point.

Four more times over the course of the segment, the Ivy League-educated O'Brien demanded to know how keeping a registry would be a form of intimidation or a punishment of law-abiding gun owners. As in the past, she asserted that hers was the moderate, and hence supposedly reasonable and unassailable position.

“I think I have a relatively rational middle of the road take on it," O'Brien insisted.

But of course, to hedge her bets, O'Brien sought to discredit Mack by lumping him in with Alex Jones, the notorious conspiracy theorist.

"The guy who was on--Alex Jones, on with Piers [Morgan] the other day, to find out that that guy has 50 guns, that makes you stop and think for a moment," she added. 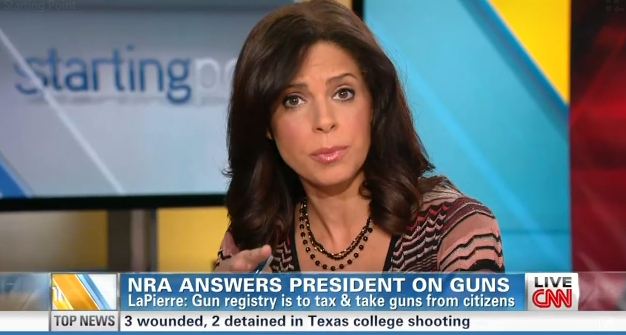 It’s unfair to equate ordinary gun owners with Alex Jones. But when one has an agenda to promote, specious comparisons help the cause.

This is not the first time O’Brien has attempted to marginalize gun rights advocates. Just last week, she ridiculed a guest who cited her fear of tyrannical government as reason to own a semi-automatic rifle: “Some people make your head hurt when they speak. Wow. And that was one of those moments,” she quipped to Democratic Rep. Tammy Duckworth of Illinois.

Last month, shortly after the Newtown shootings, O’Brien belittled economist and gun-rights defender John Lott, who argued in favor of fewer gun laws: “Your position completely boggles me, honestly. I just do not understand it.”