Charlie Crist, the Obama-supporting former Republican governor of Florida announced Friday that he has officially registered as a Democrat.

He did so by tweeting the following:

Proud and honored to join the Democratic Party in the home of President @barackobama! twitter.com/charliecristfl…

In his hand was a Florida voter registration application signed December 7, 2012: 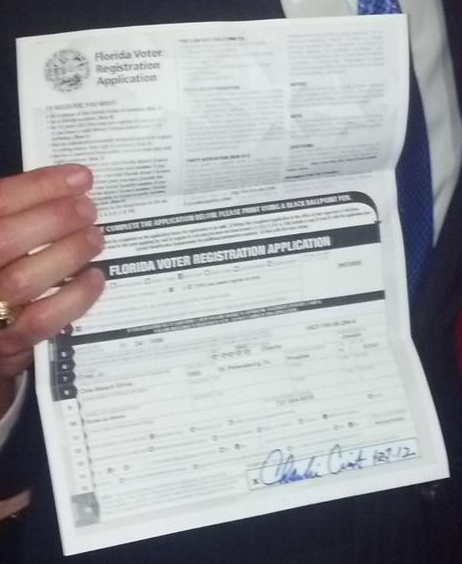 According to the Tampa Bay Times, Crist did this while at a White House Christmas reception.

"Barack Obama greeted the news with a fist bump for the man who had a higher profile campaigning for Obama's re-election this year than any Florida Democrat," wrote the Times.

Crist as a Republican was elected governor of Florida in 2006, but changed his party affiliation to independent after losing to Marco Rubio in 2010's senatorial primary only to get bested again in the general election that November while angering Republicans for doing so.

The next move which is highly anticipated is that Crist will now announce that he's running for governor again trying to unseat Republican Rick Scott in 2014.

The man who used to describe himself alternately as a "Ronald Reagan Republican" and a "Jeb Bush Republican" told the Times by phone Friday, "As I said at the [Democratic National] convention, I didn't leave the Republican Party, it left me. Whether the issue was immigration, or education, or you name it — the environment. I feel at home now."

Maybe so, but critics on both sides just see Crist as an opportunist with no real core principles he's willing to stand by.

A recent Florida GOP release concerning Crist said he "has the ability to meld into any character — from 'Chain Gang Charlie' to sympathetic 'Man of the People' — there is seemingly no role that he can't play,"

There's a lot of that going around in politics today, isn't there?