Chris Matthews on Wednesday made it clear that like Al Gore, he believes the media should only be telling one side of the story when it comes to manmade global warming.

Such came out in the middle of a discussion about Gore's new article in Rolling Stone magazine when the "Hardball" host told his guests, "I hate that so-called evenhanded so-called objective journalism" (video follows with transcript and commentary):

CHRIS MATTHEWS, HOST: Where’s the problem with climate change? Isn’t it that half the country’s being sold nonsense?

ERIC BATES, EXECUTIVE EDITOR ROLLING STONE: That’s right, and that’s exactly what this essay says. It’s interesting, the essay is really about the press and the media and how they’ve fallen down on the job in terms of being the referee in the fight between science and reason. Gore really points out that the media hasn’t done its job, and has kind of taken a “He said, she said” approach to climate change when in fact there are, there’s truth and there’s falsity in this, and the two are being conflated.

MATTHEWS: I’m with you on that, Eric. I hate that so-called evenhanded so-called objective journalism. You know, you know, you can’t say something isn’t true if it’s true in the interest of evenhandedness.

Readers are reminded that in November 2007, Gore made the same argument to Meredith Vieira on NBC's "Today" show:

AL GORE: But Meredith, part of the challenge the news media has had in covering this story is the old habit of taking the "on the one hand, on the other hand" approach. There are still people who believe that the earth is flat. But when you're reporting on a story like the one you're covering today, where you have people all around the world, you don't take, you don't search out, for someone who still believes the earth is flat and give them equal time. 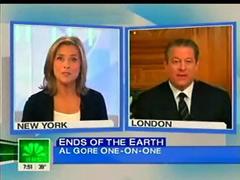 Now, almost four years later, after the ClimateGate revelations as well as numerous findings of serious errors in the last Assessment Report from the International Panel on Climate Change, Matthews wants all his colleagues in the media to cease all reporting that disagrees with his ignorant view of this subject.

There are now over 31,000 American scientists - including over 9,000 Ph.Ds - that have signed the Oregon Global Warming Petition stating, “There is no convincing scientific evidence that human release of carbon dioxide, methane, or other greenhouse gases is causing or will, in the foreseeable future, cause catastrophic heating of the Earth’s atmosphere and disruption of the Earth’s climate.”

Contrary to what shills like Matthews and Bates contend, there are far more scientists around the world that don't believe manmade carbon dioxide is responsible for the warming the globe has experienced since 1850 than actually do.

Matthews and Bates likely couldn't name off the top of their heads a handful of climatologists or meteorologists that completely support this theory.

Yet, like Gore, they want to silence everyone that doesn't agree with them.

As NewsBusters reported earlier, Matthews even thinks folks like Rush Limbaugh who don't see it his way are evil.

This coming from a so-called evenhanded so-called objective journalist.